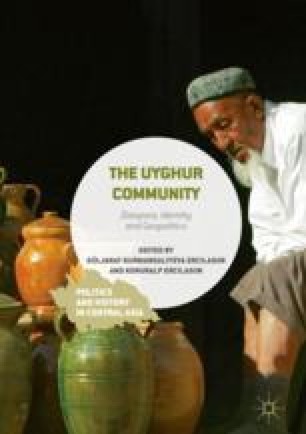 Chokan Valikhanov (Shoqan Walikhanov) was well-educated, extremely knowledgeable, prominent, and distinguished Kazakh scholar, despite his very short life of 30 years. Valikhanov wrote valuable works on the social, political, ethnographic, and juridical issues of the Kazakhs and Kyrgyzs. Furthermore, Valikhanov fulfilled a difficult and dangerous duty to explore Kashgariya (Eastern Turkistan). During his trip, Valikhanov tried to observe and get to know the community. He collected significant sociocultural, geostrategic, and economic information that were based primarily on his personal observations and interviews with reliable sources. This chapter discusses Uyghur-Chinese interactions and cultural relations in the mid-nineteenth century based on Valikhanov’s travelogues. Valikhanov’s records contain data about the Eastern Turkistanese people and their lifestyles, including their physical appearance, apparel, food and beverage, trade, language, and the question of interrecognition and identification.