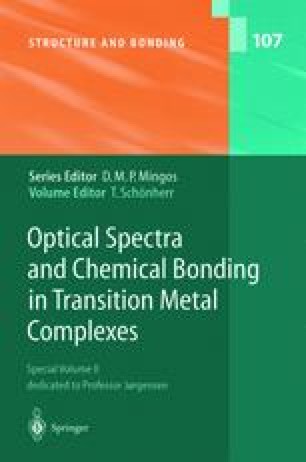 Constrained by the use of an “average-of-configuration” computation, Kohn-Sham-DFT allows identification of the complete set of dq states of the ligand field plus repulsion model, LFR. A one-to-one correspondence is assumed between states defined by integer occupation numbers of real KS spin orbitals and single-determinant ligand-field states of a hierarchic cubic-tetragonal-orthorhombic strong-field approximation. The energies of these LFR states are parameterized by using mutually orthogonal parametrical operators. This orthogonality secures optimal meaningfulness of the parameters. The DFT state energies are taken as computed “data”. For d2, each parameter is defined by a 45-dimensional coefficient vector, which is orthogonal to that of all the other parameters. By forming the scalar products of the coefficient vectors and the “data” vector, the values of the parameters are determined. Identically the same parameter values may be obtained by performing the “data” reduction using a linear least squares procedure. The Amsterdam Density Functional program package (ADF) is constrained and then its shortcomings in reproducing the LFR models is quantified. Small “random errors” and “spatial errors” are identified and eliminated. Thereafter, the KS-DFT model for atomic ions is equivalent to the five-parameter Parametrical Multiplet Term model, PMT. This model is finally contracted to the three-parameter Slater-Condon-Shortley model, SCS. This “data” reduction has substantial errors. The computed sum square splitting, SSSADF, which for systems with two electrons in the partially filled shell is the sum of the squares of the 45 barycentered ADF energies, was taken as a measure of the integrated information contents of the 44 independent computed energy differences. Then, for atomic ions, by discarding 0.05% of unsystematic information a 1:1 relationship between the constrained ADF model and the PMT model was obtained. By discarding another 2% of systematic information, a 1:1 relationship with the SCS model resulted. The SCS model is parameterized in terms of Jørgensen’s spin-pairing energy parameter D and the Racah parameter B. Even though KS-DFT does not lend itself to the direct determination of non-diagonal elements, the present parameterization procedure allows the full dq spaces to be explored.

Experimental and computed parameter values have been compared satisfactorily for all the atomic d2 and d8 systems for which all J levels have been observed. Moreover, VIIIX4– and Cr IVX4 (X=F, Cl, Br, I) have served as molecular illustrations of the method. The spectrochemical and the nephelauxetic series of ligands as well as the large gap between F- and the other halide ions are borne out by our computations and for VX4– (X=Cl and Br) the computed parameter values compare well with published semi-empirical ligand-field data. The philosophy of the cellular ligand-field model is contradicted and that of the angular overlap model supported by the computational result that the covalency of the central ion d orbitals is of dominant importance in the analysis of the frontier orbitals. The spectrochemical parameter Δ may be obtained as the appropriate KS-DFT orbital energy difference as well as from the combined KS-DFT/LFR model. The nephelauxetic ratio b may analogously be obtained in two almost independent ways, whose only common feature is the “average-of-configuration” computation. In this computation the ten spin-orbitals of the partially filled shell are equally populated, a constraint forming the basis of this whole comparative study.