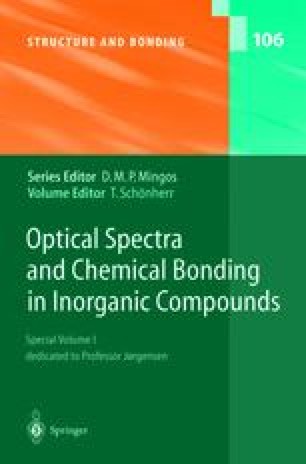 Rare Earth Ions: Their Spectroscopy of Cryptates and Related Complexes in Glasses

The paper is devoted to the memory of my teacher and friend Christian K. Jørgensen who has written the pioneering works on complexes of Rare Earths (RE).

The short theory of RE spectra and their transition probabilities and intensities, as well as the theory of energy transfer in the complexes of RE, is outlined. Europium cryptate was incorporated into zirconia glass and ormocer films. Europium sulfide and terbium sulfide as well as their oxides were incorporated in zirconia films and into composite polyurethane prepared by the sol-gel method.

Steady state and dynamic laser excited luminescence reveal an increase of the emission intensity of the complexed ions as a result of energy transfer from the ligands to the ions. The lifetimes of the emitting state 5D0 of europium and 5D4 of terbium increased in the complexed ion as a result of decrease of multiphonon relaxation by the shielding complex molecules. The method allows intensification of RE emission that cannot be achieved in the oxides of the ions. The findings allow preparation of highly fluorescent new materials.