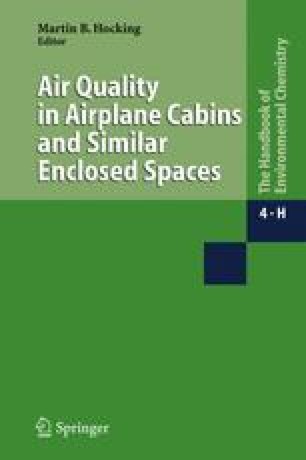 Although air quality incidents in aircraft occur at low frequencies, ranging from 1 per 10000 flights to 3.8 per 1000 flights depending on aircraft type, these are not rare events considering there are close to 30000 flights per day in the USA alone. An analysis of the reports by pilots and flight attendants indicates that the majority of reported symptoms fall into the category of central nervous system impairment, followed by problems with the respiratory system. In addition, the majority of mechanical problems that were identified as the cause of these incidents were associated with oil contamination of the air compressor stages of the engine and the auxiliary power unit (APU). In addition, in some aircraft types, hydraulic fluid contamination of the APU air intake was also frequently reported. Analysis of jet engine lubrication oils and hydraulic fluids indicates these agents can be a source of carbon monoxide and tricresyl phosphates. Exposure to either of these agents has been linked to central nervous system impairment. Identification of contaminants released into the air during such incidents is virtually non-existent as it would require a large number of air quality monitors to be placed on aircraft in order to capture these rare events. As a solution to this problem a small inexpensive air sampler has been developed that is self-contained and can be activated by anyone. This sampler also has a direct-reading CO monitor that can be used to provide an objective criterion for triggering the air sampler during an event. The exposed sampler can then be forwarded to the laboratory for analysis of oil contaminants using gas chromatography--mass spectrometry (GC-MS). In this fashion a data base can be accumulated that provides an objective measure of exposures during these incidents and whether these exposures can be linked to the symptoms that have been reported by flight crew personnel. A GC-MS analysis has the additional benefit of identifying potential synergistic agents, such as the pesticides used to disinsect aircraft.

Parts per million on a volume/volume basis