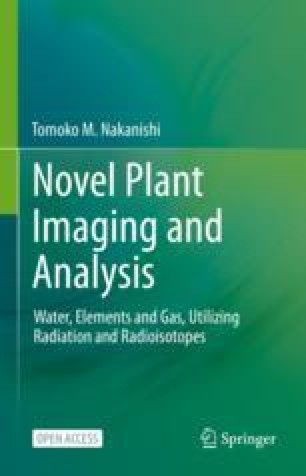 8.1 Root Movement During Growth (HARP Camera Images in the Dark)

Circumnutation is a rotating movement of a growing plant organ that is considered to result from endogenous rhythmic processes. The regular autonomous rotating movement of a root is due to different growth on the sides of the root, based on oscillators at the cellular or tissue level. However, the mechanisms responsible for circumnutation are still unclear. In particular, because of the lack of imaging tools, it has not been possible to acquire rotating images of roots under dark conditions. Since light has an influence on the physiological activity of the root, such as inducing photosynthesis, the development of devices that enable seeing the root under dark conditions is needed. Since we could use a super-HARP camera developed by the NHK broadcasting technology institute in Japan, we could visualize root circumnutation in the dark.

Four-day-old seedlings of rice plants were grown in water culture, and the super-HARP camera was set outside the phytotron to obtain images of the plant root through the glass window (Fig. 8.1). Images of the root were acquired at an interval of 1 min, and each image was accumulated for 4 s. The culturing room was kept dark, and the root-growing behavior was monitored from the next room. The rice image taken by the camera was analyzed by a computer to calculate the root length as well as root tip angle. Figure 8.2 shows an example image taken by the Super-HARP camera. Although the room was dark, the color image of the sample was shown with high resolution.
It was found that the curvature was initiated in the same region of the root, the elongation zone. The root elongation rate was kept constant with regular rhythmic movement, showing a fixed angle. The successive images of the root while growing in control solution are shown in Fig. 8.3. One round of root tip rotation took approximately 50 minutes.
However, when treated with Al solution, the rotation angle of the root tip was decreased, and then the movement resumed (Fig. 8.4). With increasing Al concentration, the time root rotation was suppressed, i.e., the time until the root resumed the rotating movement was increased. When the AlCl3 concentration was increased to 50 μM, resumption of the rotating movement was not observed even after 7 h. With 5.0 μM Al treatment, inhibition of root tip circumnutation was obtained without inhibiting root elongation (Fig. 8.5). The results offered an interesting suggestion that this new inhibition of root tip circumnutation occurred at lower Al concentrations than the inhibition of root elongation previously reported in studies of Al toxicity. This is a new phase of early reactions of the plant root to Al stress.

Whole root movement is controlled by the balance of plant hormones, and auxin probably plays a central role in root development because of its cell extension effect. Since auxin extends root cells, it has been supposed that the localization of auxin generates circumnutation. As an alternative, some environmental conditions have been discussed, including the possibility that certain metal ions induce circumnutation.

Circumnutation plays an important role in the effective development of roots in soil structures containing inhomogeneous nutrients. With a rotating root tip, roots are able to select the appropriate direction to extend smoothly. Because of the lack of tools, it was extremely difficult to study root movement in the dark. The Super-HARP camera used in this study allowed the acquisition of images in dark conditions, approximately 300 pmol/m2/s, under which no other optical devices could obtain images. Thus, the observation of root growth using the Super-HARP camera is better than any other method to study root activity in the dark.