Including the Excluded in South Asia 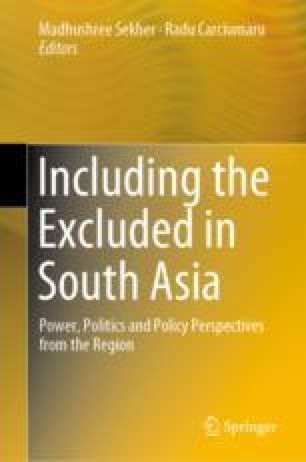 Since 2004 state has reaffirmed its commitment towards ‘rights-based development’ that granted legal rights to the citizens by enacting laws, such as Right to Information (transparency and accountability), National Rural Employment Guarantee Act (right to food and work), Right to Education and Forest Rights Act (for the tribal citizens living in the forest areas). It can be argued that there is fundamental change in the welfare regime in India in terms of redefining the citizenship-state linkages on at least four counts. First, the Supreme Court rulings and interpretation of constitution in new ways have resulted in crossovers between directive principles and fundamental rights, the former non-justiciable had now become justiciable. Secondly, the legality of the rights has changed the concept of welfare from an ‘end user’ or ‘beneficiary perspective’ to citizens with legal rights. Thirdly, welfare is now legally enforceable and demandable with a well worked out legal system (targeted goals versus due focus on elaborately worked out means and processes), focusing on equity, non-discrimination, transparency, accountability and participation (core of rights-based development). Hence, the citizens can now demand rights and accountability from the state. Fourthly, the programmatic framework of ‘welfare’ can be withdrawn but the legally supported welfare regime cannot be withdrawn. On these accounts, the changed welfare regime is expected to have a direct impact on the inclusion of the excluded. Relevant questions need to be raised, such as: who uses these rights, how do they use it and what form do these legislations take when they hit the ground-level implementation? In this context, this chapter studies the implementation of Right to Information Act (RTIA) in Bihar, a state in eastern India, to examine the progression and deepening of institutional change.