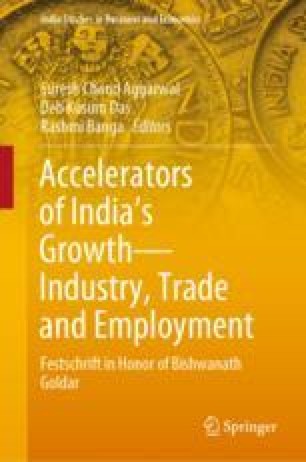 Accelerators of India's Growth—Industry, Trade and Employment pp 261-278 | Cite as

Who Creates Large Number of Good Jobs in India’s Organized Manufacturing? Small Versus Large and Start-Ups Versus Old

Manufacturing sector is important for India to meet its growing domestic demand for non-agriculture goods and thus, it assumes top priority to overcome the trade deficit. Within manufacturing, the organized component is of special importance because of its high levels of productivity, competitiveness and the potentiality to create quality or ‘decent’ jobs. These arguments reiterate by suggesting that manufacturing sector bears the highest responsibility in reaping the demographic dividend. The present study proposes to revisit the issue of assessing the manufacturing sector’s employment potential. The criteria used are size of employment, its growth, quality (regular/contract, wages) and sustainability (diversification/concentration of jobs, and vulnerability to business cycles) of employment. Using these criteria, we prepare a scorecard of manufacturing firms by age and size class so that the deficiencies are identified in order to offer future directives for appropriate policy planning. Based on the preliminary observations from the unit-level data of the Annual Survey of Industries (pertaining to organized manufacturing sector in India.) for the years 2011 and 2012 the following remarks are made: The first observation is that the missing middle as highlighted in the literature has witnessed an increase in the employment share after liberalization. The employment shares of small and large have been more or less constant, while the share of ultra-large firms has declined. In addition, it is the young firms which employ a large proportion of the workers in the total organized manufacturing in India, and employment share declines as firms grow old. Second, it is the medium and large young plants, which create most of new jobs in organized manufacturing in India. Most of the jobs are destroyed in the plants in the age of 11–25 and the contribution of start-ups in the creation of new jobs is very low. Third, the intensity of contract workers is much higher in medium and ultra-large factories, lower in small and lowest in large factories. Among young factories, it is medium and ultra-large factories that employ contract workers even more than half of their total workers. The intensity of contract workers is found lowest in start-ups, which peaks when plant is young and declines thereafter with an increase in age of the factory up to 20 years. Further, the wages are reported to be highest in start-ups, then decline as plants grow young and they are lowest in the older plants. However, beyond 10 years of age, wage increases as the factory gets older. Fourth, the employment is most diversified in medium-sized plants followed by small and large plants. It is most concentrated in the ultra-large plants. Further, the highest concentration of employment is observed in the start-ups. The diversity tends to rise as the plant gets older. In addition, the share of export rises with the increase in the plant size which also shows vulnerability to business cycles. However, no such trend is witnessed in the share of export by age group. The vulnerability is observed to be lowest for start-ups and the oldest plants (26 plus) while it is on the higher side for the older plants. In brief, it is the young middle and large plants which not only account for most of the existing employment in the organized manufacturing but also create most of the new jobs in the organized manufacturing sector in India. These jobs are although relatively low in quality in terms of contract intensity, wages paid by young firms are relatively better. This group is also generating sustainable jobs as the diversity of jobs in this segment is high and vulnerability to business cycle is also relatively low. In view of these observations, it is suggested that the policy for promoting employment in organized manufacturing in India should focus on the most dynamic group, i.e., middle-sized young factories, to generate largest number of new and sustainable jobs.

Growth and share of employment in organized manufacturing industries in India (%)

Growth of employment in organized manufacturing industries in India (%)