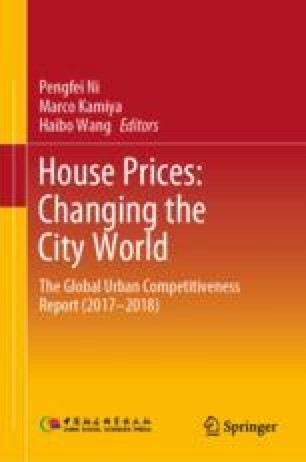 We conduct regression analysis to see how urban competitiveness affects housing price. We include various measures of competitiveness. Instead of using the original series, we first detrend the data by transforming them into the growth rates. We apply the linear regression model to each MSA separately.

Data are collected from multiple sources. HPI is the seasonally adjusted housing price index from FHFA, deflated by consumer price index of all urban consumers (housing in San Francisco-Oakland-San Jose, CA). Data on population is from US Census Bureau. Productivity is measured by annual percent change in real gross product per worker from Bureau of Labor Statistics, Bureau of Economic Analysis and Moody’s Analytics. Employment data comes from Bureau of Labor Statistics. Start-up growth relies on the data from Kauffman Foundation and Business Dynamics Statistics.

Availability of data at MSA level does restrict our regression results. To augment our analysis, we look at the correlation matrices. In the matrix, we include HPI growth, GMP growth, personal income growth, population growth, patent growth, productivity growth, start-up growth, employment growth, growth of employment in technology sector and unemployment rate. We didn’t find strong evidence that higher patent growth will be associated with housing price growth. The correlation between HPI growth and productivity growth in San Jose is positive and significant with 95% confidence, while such correlation in San Francisco is only significant at 90% confidence. Start-up growth is not so correlated with housing price growth in San Jose, but the effect is significant in San Francisco. Though employment share of technology sector is extremely high in those two MSAs, we don’t find strong evidence that higher employment growth in technology sector is associated with higher housing price growth in two MSAs (Tables 7.32 and 7.33).
Table 7.32

To explore the relation between urban competitiveness and local housing prices, we look at the interaction and dynamics of the following three variables in the benchmark analysis: the seasonally adjusted housing price index from FHFA deflated by consumer price index of housing, the start-up density, and real gross metropolitan product. We use the log variables, instead of the originals, to map those variables from the positive domains to a comparable range defined on the real line.

Start-up density is a proxy of innovative potential and vibrancy of local industries, driving the future growth of a city. The indicator reflects the state of both the demand and the supply side of the local labor market, in terms of business and job creation activities. Housing price index summarizes the sales and refinancing of the local housing market, which is the key statistic of the report. Real gross metropolitan product is defined as the market value of final goods and services created for a given period, which indicates economic performance as well as labor productivity of the local market.

We focus our attention on those three variables for two reasons. First, as the frequency of the time series is annual and the length of the data is short due to data availability, we try to work on a simple model with fewer but necessary variables to understand the relationship between competitiveness and housing prices. Second, those three time series seem to describe the economic dynamics well. Our post-estimation tests and robustness check show that the qualitative features over time as well as across MSAs can be captured by the simple dynamics of the benchmark model.

We consider applying vector autoregression (VAR) or vector error correction (VECM) model to our analysis. Instead of taking a stand on the dependency or linkage between competitiveness and housing prices, we attempt to treat them equally by including all contemporaneous variables as dependent and their lags as explanatory variables. We estimate the system as a whole.

Before going to regression analysis, we conduct Dicky-Fuller test on each series to test whether the processes are unit-root, and confirm that they are not covariance stationary, but integrated series of order 1. Hence, it is improper to apply the VAR model directly to the level variables. We further test whether the series are cointegrated, Johansen’s trace statistics show that we cannot reject the existence of 1 cointegrating relationship between our time series. It is improper to apply the first differences of the series to a VAR model which assumes no cointegrating relationship. A VECM model will correct the problem by introducing an error correction term in each first-difference VAR regression equation.

By comparing the estimated coefficients between San Jose and San Francisco, we notice most of the coefficients carry the same sign or are qualitatively the same. But two MSAs do differ in several aspects. Besides, we observe the effect of last year’s GMP growth on today’s housing price growth is negative in both San Jose and San Francisco. The reaction to GMP is not statistically significant, so it may stem from the length of the data we work with.

Another noticeable difference is the effect of last year’s start-up density growth on today’s GMP growth. The coefficient in San Jose is negative and that in San Francisco is positive, though both are not statistically significant.

The coefficients in \( \Gamma \) capture the short-run dependence of the lag variables. As to the long run, the cointegration equation is informative. Our model implies the following cointegrating relationship in the long run (Table 7.34):
Table 7.34

To explore the dynamics of the system, we simulate the model by hitting each variable with a one-time one-standard-deviation shock to see how each variable will react to the unexpected impulse over time. The figures show the panels of impulse response functions for each MSA. The length of each step is by year. The vertical axis shows the change of the response variable. Due to the cointegrating relationship, the effect of a shock in most cases are permanent, though it will gradually settle down to the new level in 3–5 years.

Panel (row 3, col 2) show that a one-standard deviation shock to the start-up density results in 2% increase in housing price in both MSAs.

Panel (row 1, col 2) shows the reaction of the housing price to a GMP shock. The effect is predicted to be negative in San Jose, while the effect in San Francisco, is initially positive. As the estimated coefficient of GMP in HPI regression is insignificant, the confidence interval will be fat, so that the difference in IRF across MSAs is inconclusive of the different reaction to a GMP shock across MSAs (Figs. 7.77 and 7.78).

Appendix: The Calculation of Two Indexes Measuring the Housing Affordability in Tokyo