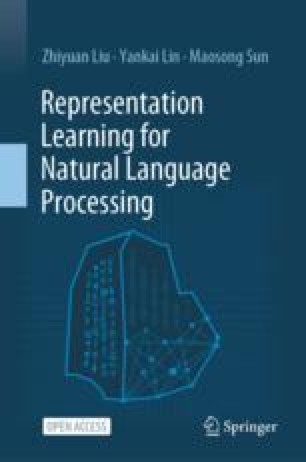 Natural languages are typical unstructured information. Conventional Natural Language Processing (NLP) heavily relies on feature engineering, which requires careful design and considerable expertise. Representation learning aims to learn representations of raw data as useful information for further classification or prediction. This chapter presents a brief introduction to representation learning, including its motivation and basic idea, and also reviews its history and recent advances in both machine learning and NLP.

1.2 Why Representation Learning Is Important for NLP

Multiple Tasks. There are various NLP tasks based on the same input. For example, given a sentence, we can perform multiple tasks such as word segmentation, part-of-speech tagging, named entity recognition, relation extraction, and machine translation. In this case, it will be more efficient and robust to build a unified representation space of inputs for multiple tasks.

Multiple Domains. Natural language texts may be generated from multiple domains, including but not limited to news articles, scientific articles, literary works, and online user-generated content such as product reviews. Moreover, we can also regard texts in different languages as multiple domains. Conventional NLP systems have to design specific feature extraction algorithms for each domain according to its characteristics. In contrast, representation learning enables us to build representations automatically from large-scale domain data.

In summary, as shown in Fig. 1.2, representation learning can facilitate knowledge transfer across multiple language entries, multiple NLP tasks, and multiple application domains, and significantly improve the effectiveness and robustness of NLP performance.

In this book, we focus on the distributed representation scheme (i.e., embedding), and talk about recent advances of representation learning methods for multiple language entries, including words, phrases, sentences, and documents, and their closely related objects including sememe-based linguistic knowledge, entity-based world knowledge, networks, and cross-modal entries.

By distributed representation learning, all objects that we are interested in are projected into a unified low-dimensional semantic space. As demonstrated in Fig. 1.1, the geometric distance between two objects in the semantic space indicates their semantic relatedness; the semantic meaning of an object is related to which objects are close to it. In other words, it is the relative closeness with other objects that reveals an object’s meaning rather than the absolute position.

1.4 Development of Representation Learning for NLP

In this section, we introduce the development of representation learning for NLP, also shown in Fig. 1.3. To study representation schemes in NLP, words would be a good start, since they are the minimum units in natural languages. The easiest way to represent a word in a computer-readable way (e.g., using a vector) is one-hot vector, which has the dimension of the vocabulary size and assigns 1 to the word’s corresponding position and 0 to others. It is apparent that one-hot vectors hardly contain any semantic information about words except simply distinguishing them from each other.

One of the earliest ideas of word representation learning can date back to n -gram models [15]. It is easy to understand: when we want to predict the next word in a sequence, we usually look at some previous words (and in the case of n-gram, they are the previous \(n-1\) words). And if going through a large-scale corpus, we can count and get a good probability estimation of each word under the condition of all combinations of \(n-1\) previous words. These probabilities are useful for predicting words in sequences, and also form vector representations for words since they reflect the meanings of words.

The idea of n-gram models is coherent with the distributional hypothesis: linguistic items with similar distributions have similar meanings [7]. In another phrase, “a word is characterized by the company it keeps” [6]. It became the fundamental idea of many NLP models, from word2vec to BERT.

Another example of the distributional hypothesis is Bag-Of-Words (BOW) models [7]. BOW models regard a document as a bag of its words, disregarding the orders of these words in the document. In this way, the document can be represented as a vocabulary-size vector, in which each word that has appeared in the document corresponds to a unique and nonzero dimension. Then a score can be further computed for each word (e.g., the numbers of occurrences) to indicate the weights of these words in the document. Though very simple, BOW models work great in applications like spam filtering, text classification, and information retrieval, proving that the distributions of words can serve as a good representation for text.

One of the pioneer practices of distributed representation in NLP is Neural Probabilistic Language Model (NPLM) [1]. A language model is to predict the joint probability of sequences of words (n-gram models are simple language models). NPLM first assigns a distributed vector for each word, then uses a neural network to predict the next word. By going through the training corpora, NPLM successfully learns how to model the joint probability of sentences, while brings word embeddings (i.e., low-dimensional word vectors) as learned parameters in NPLM. Though it is hard to tell what each element of a word embedding actually means, the vectors indeed encode semantic meanings about the words, verified by the performance of NPLM.

Inspired by NPLM, there came many methods that embed words into distributed representations and use the language modeling objective to optimize them as model parameters. Famous examples include word2vec [12], GloVe [13], and fastText [3]. Though differing in detail, these methods are all very efficient to train, utilize large-scale corpora, and have been widely adopted as word embeddings in many NLP models. Word embeddings in the NLP pipeline map discrete words into informative low-dimensional vectors, and help to shine a light on neural networks in computing and understanding languages. It makes representation learning a critical part of natural language processing.

The research on representation learning in NLP took a big leap when ELMo [14] and BERT [4] came out. Besides using larger corpora, more parameters, and more computing resources as compared to word2vec, they also take complicated context in text into consideration. It means that instead of assigning each word with a fixed vector, ELMo and BERT use multilayer neural networks to calculate dynamic representations for the words based on their context, which is especially useful for the words with multiple meanings. Moreover, BERT starts a new fashion (though not originated from it) of the pretrained fine-tuning pipeline. Previously, word embeddings are simply adopted as input representation. But after BERT, it becomes a common practice to keep using the same neural network structure such as BERT in both pretraining and fine-tuning, which is taking the parameters of BERT for initialization and fine-tuning the model on downstream tasks (Fig. 1.4).

Though not a big theoretical breakthrough, BERT-like models (also known as Pre-trained Language Models (PLM), for they are pretrained through language modeling objective on large corpora) have attracted wide attention in the NLP and machine learning community, for they have been so successful and achieved state-of-the-art on almost every NLP benchmarks. These models show what large-scale data and computing power can lead to, and new research works on the topic of Pre-Trained language Models (PLMs) emerge rapidly. Probing experiments demonstrate that PLMs implicitly encode a variety of linguistic knowledge and patterns inside their multilayer network parameters [8, 10]. All these significant performances and interesting analyses suggest that there are still a lot of open problems to explore in PLMs, as the future of representation learning for NLP.

People have developed various effective and efficient approaches to learn semantic representations for NLP. Here we list some typical approaches.

Statistical Features: As introduced before, semantic representations for NLP in the early stage often come from statistics, instead of emerging from the optimization process. For example, in n-gram or bag-of-words models, elements in the representation are usually frequencies or numbers of occurrences of the corresponding entries counted in large-scale corpora.

Hand-craft Features: In certain NLP tasks, syntactic and semantic features are useful for solving the problem. For example, types of words and entities, semantic roles and parse trees, etc. These linguistic features may be provided with the tasks or can be extracted by specific NLP systems. In a long period before the wide use of distributed representation, researchers used to devote lots of effort into designing useful features and combining them as the inputs for NLP models.

Supervised Learning: Distributed representations emerge from the optimization process of neural networks under supervised learning. In the hidden layers of neural networks, the different activation patterns of neurons represent different entities or attributes. With a training objective (usually a loss function for the target task) and supervised signals (usually the gold-standard labels for training instances of the target tasks), the networks can learn better parameters via optimization (e.g., gradient descent). With proper training, the hidden states will become informative and generalized as good semantic representations of natural languages.

For example, to train a neural network for a sentiment classification task, the loss function is usually set as the cross-entropy of the model predictions with respect to the gold-standard sentiment labels as supervision. While optimizing the objective, the loss gets smaller, and the model performance gets better. In the meantime, the hidden states of the model gradually form good sentence representations by encoding the necessary information for sentiment classification inside the continuous hidden space.

Self-supervised Learning: In some cases, we simply want to get good representations for certain elements, so that these representations can be transferred to other tasks. For example, in most neural NLP models, words in sentences are first mapped to their corresponding word embeddings (maybe from word2vec or GloVe) before sent to the networks. However, there are no human-annotated “labels” for learning word embeddings. To acquire the training objective necessary for neural networks, we need to generate “labels” intrinsically from existing data. This is called self-supervised learning (one way for unsupervised learning).

1.6 Applications of Representation Learning for NLP

In general, there are two kinds of applications of representation learning for NLP. In one case, the semantic representation is trained in a pretraining task (or designed by human experts) and is transferred to the model for the target task. Word embedding is an example of the application. It is trained by using language modeling objective and is taken as inputs for other down-stream NLP models. In this book, we will also introduce sememe knowledge representation and world knowledge representation, which can also be integrated into some NLP systems as additional knowledge augmentation to enhance their performance in certain aspects.

1.7 The Organization of This Book

Another interesting topic related to NLP is the cross-modal representation, which studies how to model unified semantic representations across different modalities (e.g., text, audios, images, videos, etc.). Through this section, we review several cross-modal problems along with representative models.

At the end of the book, we introduce some useful resources to the readers, including deep learning frameworks and open-source codes. We also share some views about the next big topics in representation learning for NLP. We hope that the resources and the outlook can help our readers have a better understanding of the content of the book, and inspire our readers about how representation learning in NLP would further develop.