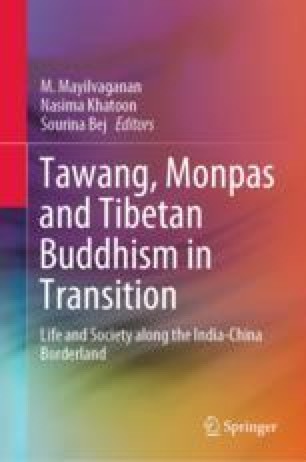 Tawang, Monpas and Tibetan Buddhism in Transition pp 115-133 | Cite as

In 2016, when the National Green Tribunal suspended the environmental clearance for the mega-hydropower projects on Nyamjang Chu and Tawang Chu, it became one of the most important judgments won by the Monpas. The judgment took into consideration the concerns of the local population. However, beyond the socio-religious importance, this chapter attempts to address the major concern of flooding that is deemed to be caused by the building of dam projects on the Nyamjang Chu and Tawang Chu rivers in the Tawang district of Arunachal Pradesh. Estimation of the proximity of the inhabited places from the proposed dam site was carried out. The altitude has been observed to see if any natural and regular conditions can raise the water levels of the rivers up to these villages and towns, causing floods. The chapter has then sought to provide visual interpretation and inference analysis using standard geospatial methods of digitisation to gauge the extent of the human–environment impact that the dam projects would incur. Cross-sectional maps were generated to identify and analyse certain relevant aspects of topography and its suitability for building of dams while carrying out the analysis in the chapter. The chapter is an attempt to support the comprehensive ethnographic study carried out for the project, but it has limitations due to the constraints of resources and methodology. It is a preliminary level assessment which has vast scope to be augmented with detailed study.

Note. All of Authors GIS outputs presented in the chapter are for illustration purposes only and not to scale.