Atlas of Diagnostic and Predictive Histopathology 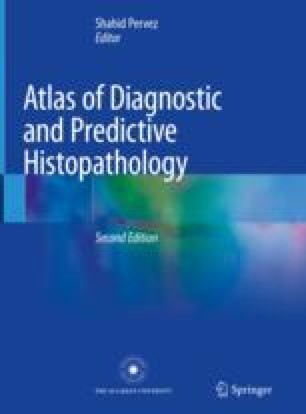 Atlas of Diagnostic and Predictive Histopathology pp 465-489 | Cite as

Histopathology of Respiratory System and Mediastinum

Biopsies from respiratory system like bronchial and lung parenchymal are among the commonest ones. Besides conventional bronchoscopic biopsies, tiny CT-guided biopsies are also frequent. On the flip side, treating physicians require more and more information not only in terms of a definitive entity but also what therapy they are likely to respond. This puts immense pressure on the pathologists to be highly judicious in performing IHC markers to leave enough tissue for mutational analysis like EGFR, ALK, ROS1 and PD-L1. Among non-neoplastic lesions, ‘interstitial lung diseases’ are among the most demanding and challenging with subtle and overlapping features requiring quick revision of the subject. Pleural biopsies are also at times challenging. Mediastinal pathology is markedly diverse, and almost any kind of pathology may be seen in this region. In this chapter however our focus is on those entities which are indigenous to this region like various types of thymoma.

Thymomas, despite their name, are malignant tumours of the thymic epithelial cells. These are the most common mediastinal neoplasms of adults. WHO has listed down a number of associated autoimmune and paraneoplastic syndromes, such as myasthenia gravis. There is TNM staging system as well as a Masaoka-Koga staging system, which incorporates the histological features into the TNM classification. Invasion into the adjacent tissue, which is a requirement to call a thymoma an invasive thymoma, may be seen in any type of thymomas but is more common in type B3 thymomas when one does not include the thymic carcinomas for this purpose. This feature is of importance for staging, therefore, careful evaluation of the tumour capsule is important.