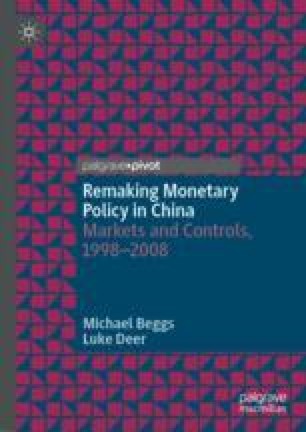 This is the second of a pair of chapters opening the ‘black box’ of the banking system to understand the transmission mechanism through which the People’s Bank of China tried to influence its money and credit intermediate target variables. Here we present a critique of the ‘industrial organisation’ framework and develop an alternative that fits with Chinese policymakers’ statements. Banks in the aggregate are not constrained by a need to raise deposits, but by the cost and availability of liquidity in the form of reserves. We discuss how this manifested in the Chinese financial system—not so much to explain how policy was able to use the bank liquidity constraint to manage lending, but to show why this was difficult in the 2000s.

Figure 5.1 is based on the PBC’s ‘depository corporation survey’, which follows the principles of the International Monetary Fund’s (2000) Monetary and Financial Statistics Manual. This records the consolidated balance sheet of all financial institutions whose liabilities are included in the broad money supply (M2, i.e., demand and time/savings deposits plus currency held by non-bank, non-government units). This sectoral balance sheet can be used to decompose the balance sheet counterparts to growth in broad money. The basic equation in the Manual’s framework for decomposing change in the money stock is:

There is unfortunately a substantial unidentified gap between assets and liabilities in the depository corporation survey data, which raises problems for interpretation. We have highlighted this by separating the OIN into two categories, one representing identifiable non-monetary liabilities, and the other an unidentified residual category. The identified non-monetary liabilities include (i) deposits excluded from broad money (perhaps including the deposits of some non-bank financial institutions and local governments), (ii) bank bonds, and (iii) paid-in capital. The residual category corresponds to the ‘liability: other’ category in the PBC’s depository corporation survey. It must include miscellaneous liabilities such as retained earnings (owners’ equity excluding paid-in capital). But note that this category was negative until the third quarter of 2007, so that unidentified assets must exceed unidentified liabilities.

This makes interpreting change in this category difficult, especially in the absence of any official comment. The figure will reflect not only actual movements in unidentified balance sheet categories, but also changes in identification. There is good reason to believe that the periods of major change in this category usually reflect data categorisation issues rather than something more substantial—it always has a counterpart in an unusual change in another category.

In the first quarter of 2001, the jump in the residual category corresponds with a large fall in recorded claims on non-government units—the only fall for this category in the whole series. This apparent decline in bank claims on firms and households does not appear in the PBC’s separate data series on loans (CEIC series code 7029101, CKAHLA) or the flow-of-funds accounts (CEIC series code 1819401, CAACBU). This suggests it is an artefact of classification.

The large fall in the residual in the first quarter of 2002 coincides with a known change in data classification. In this quarter, two new categories were added to the depository corporations survey balance sheet: ‘claims on other [i.e., non-bank] financial institutions’ on the asset side, and ‘deposits excluded from broad money’ on the liability side. The outcome was a simultaneous large fall in the residual ‘other liabilities’ category and increase in domestic credit (which we have combined into the ‘domestic credit - to nongovernment’ item) as a large volume of what had been unidentified was allocated to the new categories. This does not fully explain the changes in the residual category that quarter, but we can assume that other classification changes also took place. Discrepancies may also have arisen from lags associated with the sharp rise in central bank foreign exchange purchases.

Finally, the large fall in the residual category in the last quarter of 2007 coincides with an unusually large increase in bank claims on government. We presume, but cannot prove, that this involved a reclassification of some form of official debt.

Our main claim is not undermined by these difficulties. Over the whole period, most change in money growth corresponds to growth in net foreign assets and bank lending to firms and households, rather than increasing government debt. Movements in the unexplained residual were often small, particularly between mid-2002 and mid-2006, and we have suggested that the large jumps outside this timeframe were largely artefacts of data reclassification. It is worth noting, however, the modest but real role of growth in identified non-monetary liabilities—especially bank bond and equity issuance—in widening the gap between banking system assets and money supply from mid-decade. This is much more important than growth in ‘deposits excluded from broad money’.