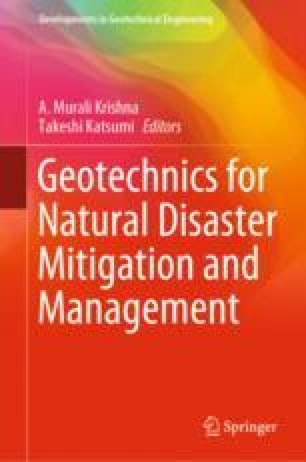 Liquefaction is a well-known seismic hazard during which soil starts behaving like a fluid and is no longer be able to support structure due to the reduction in its shear strength. Deep ground modification techniques can be very effective in reducing liquefaction potential by vibration/displacement/stabilization of loose granular soil. In this paper, the efficacy in mitigating the liquefaction potential of soil by different methods of ground improvement, by comparing SPT and eCPT values of the soil before and after the soil improvement, are discussed.

Liquefaction is a phenomenon in which a saturated cohesionless soil looses its shear strength during an earthquake and acquires a degree of mobility sufficient to permit significant movements. This loss of strength may take place in sandy soil due to an increase in pore water pressure and consequent reduction in effective stress of the soil. The soil that has lost its shear strength behaves like a viscous fluid. Liquefaction primarily occurs in sediments of sands and silts in areas with high groundwater table.

Our ability to identify the existence of soil liquefaction potential is now better than our ability to know what can be done to mitigate it economically and effectively. Ground improvement methods, such as densification (e.g., dynamic compaction, vibro compaction), stabilization (e.g., cementation), and replacement (e.g., stone columns), have been found to be effective in mitigating soil liquefaction.

In actual practice, field testing, such as penetration tests and shear wave propagation tests, before and after deep ground improvement is considered as the simplest and most direct way of verifying the efficiency of ground improvement. This also helps in ensuring that the target level of liquefaction mitigation is achieved. In this paper, four selected methods of ground improvement, namely dynamic compaction, vibro compaction, stone columns and cementation, and their efficacy in improving the soil at site, are discussed.

In this section, selected methods of ground improvement and their efficacy in mitigating liquefaction potential are discussed. In all case studies discussed below, the soil was loose fine sand with very little fines up to great depths, as is the usual case in Indo-Gangetic plain. Ground water table depth was 1–2 m in all cases.

The depth of liquefaction was estimated to be 12 m as per IS:1893-2002 (Fig. 12.1) [1]. Usually, this method is considered effective and economic for the depth of compaction up to 10 m only. Hence, the top 2 m of soil was removed at the site and then the compaction was carried out. A photograph of ongoing dynamic compaction at the field is shown in Fig. 12.2.
The process of dynamic compaction was carried out by adopting the grid size of 4 m × 4 m. The total compaction energy required was applied in 3 phases consisting of two tamping phases and one ironing phase. In tamping phase I, a mass of 11.38 t was allowed to fall from a height of 15 m for 15 number of times on properly chosen grids. Thus, the total energy imparted was 116.3 kJ/m3 at each grid. Tamping phase II was conducted after 1-week time lag to allow for pore water pressures, if any, to dissipate. Similar compaction effort was used for conducting phase II. Finally, ironing phase was carried out to compact the top layer by allowing a mass of 11.38 t to fall from height of 5 m for 5 number of times, thus imparting a total energy of 43.61 kJ/m3. The total compaction energy given combining all the three phases was 276 kJ/m3 which is greater than required compaction energy, i.e., 250 kJ/m3. Effective depth of improvement was found to be about 9 m, thus the volume of soil affected by dynamic compaction was 144 m3. Deep craters of about 1.5 m × 1.5 m area formed by tamping were filled by good quality sand after each pass. After dynamic compaction, site area was graded and compacted on surface with the help of vibratory roller of at least 10 t capacity with at least 10 passes. Corrected SPT values after dynamic compaction are shown in Fig. 12.3. Liquefaction resistance was also evaluated by Youd et al. [2] method.

Field trials were conducted using vibro compaction and stone columns. The depth of treatment evaluated from liquefaction methodology was 12.00 m. Based on the treatment depth and performance criteria, the following treatment schemes were proposed:

Above two vibratory methods, namely vibro compaction and vibro replacement with stone columns, were tested in situ for their efficacy in mitigating the liquefaction potential but were found out to be not efficient.

Two more methods were tested, namely soil compaction with vibratory roller up to the modified proctor density, and compacted soil cement. The area for mock-ups was finalized based on the maximum available GWT criteria. GWT was 1 m below the GL. The mock-ups were to be tested for wet conditions at min 4.0 m below the GWT, so a pit for mock-up area was dug up to 5.0 m depth from GL.

The soil from borrow pit was excavated and then sent to an WMM mix plant to attain OMC. Then the soil at OMC was compacted in the mock-up pit in a layer of 200 mm at a time with 10 passes of a 10-tonne vibratory roller to achieve dry density corresponding to heavy Proctor compaction (Fig. 12.4).

Simultaneously, various soil–cement mixes were tested in the lab with varying cement %. The soil–cement mock-up was constructed with 5% cement concentration at optimum moisture content. The soil–cement mixture at OMC was compacted in the mock-up pit in a layer of 200 mm at a time with a 5 passes of a 10 tonne vibratory roller to achieve dry density corresponding to Proctor compaction. Both the above mock-up sites were tested for different parameters in the field and in lab (Fig. 12.4).