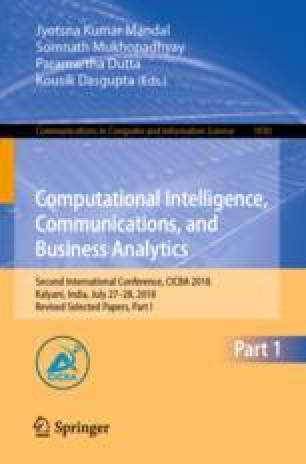 Signature-based authentication of human is still very popular approach. Manual checking is not always accurate and it depends on expertise. The need is an automated and accurate system for signature classification. The signatures do not necessarily comprise of well-formed letters. It can be a random combination of curves and lines. The written signature may be of variable sized, inclined in arbitrary angle or misplaced. This makes the classification task more challenging. This paper proposes an automated approach of handwritten signature classification addressing those problems. The binarized version of the input image is pre-processed in various ways to compensate translation, rotation and noise removal. The four features, which does not vary due to scaling, are selected from the pre-processed image for the classification using k-NN classifier. Overall system accuracy of the proposed approach is 92% on a dataset of 100 images.

Modern life is becoming more complex day by day. It requires countless daily transactions in various fields of work like financial, administrative, legal, social, political, economic, business and travel. The rapid growth in population has assumed utmost importance for protecting the identity of individuals and ensuring the security of documents involved. Conventionally, identification and security of paper documents have been ensured using a signature based system which has been mostly verified manually by humans with relevant experience. However since the world is becoming faster every day, cutting down on time and increasing the reliability of verification systems, have become an absolute necessity. People are therefore relying more on automated systems and machine intelligence to perform verification tasks. Image processing and pattern recognition techniques have been employed to perform verification tasks in an automated way by building data models of the signatures and using classifiers to segregate them into pre-defined classes.

The main challenges of a signature recognition system are two-fold: the first arises from the inherent variability of the signature itself. A signature does not necessarily comprise of a set of well-formed characters or alphabets, rather it is generally a combination of a set of lines and curves, intersecting or separate. Building a reliable data model of such an entity is difficult by itself. Moreover, two signatures are never identical as signatures written by the same person are bound to differ to some extent. Apart from the shape of the written signature, the size and orientation of the signatures are also liable to change. Given so much variability, it seems almost impossible to build a reliable recognition system, especially when it is also possible that others might be trying to purposely forge a valid signature. The second challenge arises from the variability introduced by an automated recognition system. These arise from the noises introduced by a data acquisition system, variation in lighting conditions and sensor characteristics, transformations like translation, rotation and scale of a scanned signature. An effective signature recognition system should be able to address both types of challenges. Such a system should also be efficient as most recognition tasks are expected in real time and should be done without much delay.

The rest of the paper is organized as follows: Sect. 2 includes a study of existing approaches, Sect. 3 outlines the proposed approach, Sect. 4 tabulates experimental results, Sect. 5 consists of an analysis of the current work side by side other works, and Sect. 6 brings up the conclusion and future scopes.

A number of different approaches for signature recognition and classification have been proposed in existing literature. In the grid-based [1] the binary signature image was divided into horizontally and vertically 8 × 8 total 64 grids and calculate the features in four directions right to left, left to right, top to bottom and bottom to top respectively for each grid. The numbers of the white pixels are counted from the first white pixel to first black pixel and the number of the white pixel present between two black pixels present in each grid. The features were classified by using k-NN classifier and achieved 56% accuracy. A drawback of this approach is that the signature needs to be perfectly aligned to create horizontal and vertical grids; the technique fails for a rotated signature. A local binary pattern has been used in approach [2, 7, 11]. The center pixel works over a radius of 4.256 and generates a 64-bin histogram for each signature image and 10 nearest neighbors on the k-NN algorithm to classify the signatures. This method achieves an overall 70% accuracy. In paper [11] a local derivative pattern has been used. In paper [3] a grid feature [4, 9] and centroid feature are used. The system worked on 36 signatures of one writer and some forgery signatures. Then the signature image was divided into 10 × 10 grids in vertical as well as horizontal manner and then determines which grid contained more than 3 black pixels to save it as a feature. After generating the grid feature it segmented the image in regular 3 parts and calculates the distance between centroids of these three parts. The multiple global features, grid feature and SIFT feature have been used in a combined way in a different system [6]. Though the system used so many features to classify a signature still it has failed to generate a satisfactory accuracy and produced 88% overall accuracy. The system could not perform over signature position’s variations. The pixel value defers when it is rotated or scaled in a different manner. To overcome this problem the introduced approach used the features which will not depend on the position of signature.

Most of the existing works on signature recognition focus on modeling the signature shapes using a variety of features, but these techniques usually do not work satisfactorily when the signatures are transformed using translation, rotation, and scaling. This paper utilizes a set of transformation invariant features to compensate for such transformation based variations. The system design in Fig. 1 outlines the procedure.

Cropping is done by calculating the boundaries [11] of the bounding box as done previously and keeping only the portion inside the box discarding all portions external to the box.

In noise removal step, a filtered image is being generated by deleting all the extra pixels which are not part of the actual signature. It can be a spot of ink. To remove this noise the machine checks the generated area value of a signature and filter the image by using a minimum area value as a threshold which is fixed for each image.

Each person has a distinct signature style. To analyze the signatures correctly after placed it in a proper way, the following signature based features are estimated from the cropped image like Aspect Ratio (AR), Number of Regions (NR), Gradient Magnitude (GM) and Corner Points (CP).

Corners of an image contain important features. The corner points [5, 8] of signatures are detected by using Harris corner detection method. It returns the coordinate values of the corner points. Here, total number of corner point used as classification feature CP. Figure 8 shows the corner points of a signature as blue markers.
$$ CP = \,Total\,number\,of\,Corner\,points\,in\,the\,Signature $$
(12)

It is to be observed that each of the features does not depend on rotation, scaling and translation. The final feature vector (FV) is formed with the geometrical transformation independent features i.e. \( AR, NR,GM, \,and CP \). Refer to Eq. (13).
$$ {\text{FV }} = \left\{ { AR, NR,GM,CP} \right\} $$
(13)
Figure 9 shows the scatter plot of features. 10 colors represent train samples of 10 distinct classes. This plot shows how the features are discriminating different classes of train data set.

Where, Posterior denotes P(Ck | x), Prior named as P(Ck), Likelihood named as P(x | Ck) and Evidence state as P(x).

k-Nearest Neighbours algorithm is used for classification in pattern recognition system. A signature is classified by its nearest neighbours and based on the similarity amongst them. This algorithm checks the features of a test signature and compares the same with the training samples. The class of the training sample, which is to the closest to the test signature, is selected as the class of test signature. Finally, the overall system accuracy is calculated using Eq. 16.
$$ Accuracy = \left( {No.\,of\,correctly\,classified\,Sample} \right)/\left( {Total\,no.\,of\,Sample} \right) $$
(16)

The proposed approach is for offline signature [10] where the signatures to be collected using pen and paper. In this work, the system used total 100 signatures from 10 different persons. This dataset comprises 10 signatures from each individual, using blue or black ink on an A4 size page within a fixed size box where each page contains 10 signatures. The images have been scanned by using scanner application of smartphone. Each class contains total 10 signatures and they equally divided for train and test data. The signatures with different angle, different sizes have been used to determine the effectiveness of this approach. Figure 10 shows one sample of each class from the training dataset. Figure 11 shows one sample of each class from the testing dataset.
All four features are tested individually to see the classification ability of each feature. Finally, those four features are combined to get an improved accuracy. Table 1 depicts accuracy of individual features as well as combined features using k-NN classifier.
Table 1.

Table 2 shows overall classification accuracy of proposed feature vector using three different classifiers and in order to cross-validate the results to remove any bias for selecting the training and testing datasets, they have been exchanged and accuracies are once again calculated as given in Table 2.
Table 2.

Classification result of the previous approaches on the same dataset

Figure 13 shows class wise accuracy comparison of the proposed approach and previous approaches. Redline depicts that proposed approach performs better than the previous approaches for most of the classes.
Figure 14 shows the accuracy of different approach using different classifier. k-NN classifier gives the better result than other classifiers for all the approach. Combination of k-NN and proposed feature vector gives the best result. The k-NN classification algorithm relies on the distance between feature vectors. It performs on labeled images to predict correctly and returns the actual category for the image. This is the reason for selection k-NN. The previous methods by Ubul et al., Ilmi et al. have worked on pixel values which vary by position of the signature and their methods failed for rotated signatures where this proposed method has worked on signatures with different angle and size and used the translation, rotation and scaling independent features.

There are some systems where they used so many features to recognize and classify a signature which increases the computational time [6] but proposed system completes classification task within a fraction of a second.

Signature classification should be accurate because signature verification is a requirement for security purpose in daily life like in a bank, official purpose, forensic lab etc. In this paper, a transformation invariant method for signature recognition has been proposed. The input signature image is converted to a binary image. This binary image is pre-processed in different way to compensate translation, rotation and noise removal. The pre-processed image is used for feature extraction. Extracted features are Aspect ratio (AR), Number of regions (NR), Mean of gradient magnitude (GM) and Number of corner points (CP). These features are combined and used for classification of 10 signature classes. k-NN classifier gives the best result comparative to other classifiers used for experimentation. Overall classification accuracy is 92% using k-NN classifier.

The contributions of this paper are (a) prepared a ground truth handwritten signature dataset of 100 images (b) the signature classification technique is translation, rotation and uniform scaling independent. Extending the proposed technique to include images which are scaled non-uniformly and rotated by 180° may provide scopes for future research work.