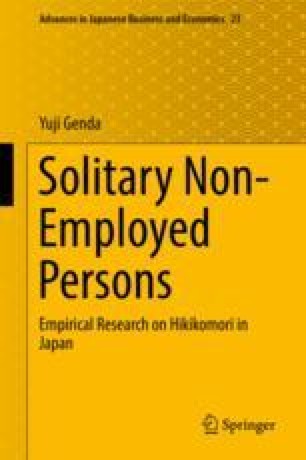 The Determinants and Characteristics of SNEP

A probit analysis was performed on the determinants that increased the risk that an unmarried, non-employed person aged 20–59 (UMNEP) would become solitary non-employed. The independent variables included the characteristics discussed in this chapter: gender, age, educational background, annual household income, city size by population, the presence of a person who required long-term care in the household, and time spent on medical treatment or care.

We also added several independent variables. The STULA includes questions on the weather conditions during the survey dates. For example, rain might limit people’s opportunities to interact with their friends and acquaintances. Considering these possibilities, rainy conditions on survey dates were added as an independent variable. The days of the week of the survey were also incorporated. If the survey dates fell on a Saturday or Sunday, it might be easier for individuals to see their friends and acquaintances. However, those friends and acquaintances might give top priority to spending time with their own families or on their own interests instead; in that way, situations in which the survey dates included a weekend could actually make interpersonal contact less likely. Thus, we also accounted for the possibility that the day of the week might affect the solitary non-employment phenomenon.

Tables 2.1 shows the estimates for the above variables in each of the surveyed 5 years: 1996, 2001, 2006, 2011, and 2016. According to the estimated results, men were significantly more likely to become SNEP from 1996 to 2011. However, the marginal effect of a male dummy variable became insignificant in 2016, as explained in this chapter. The interpretation of educational background, which is explained in the chapter, can be also confirmed in Table 2.1. In all of the 4 years except 2016, people with no more than a junior high school education had a significantly higher probability of becoming SNEP. On the other hand, the university graduate UMNEP tended to become SNEP most frequently among all educational backgrounds, based on the results in 2016.

This table supports the assertion, stated in this chapter, that isolation among young non-employed persons was becoming an increasingly serious problem. The marginal effects of the dummy variable for age were significantly negative for the 20–24 and 25–29 age groups for the 1996 and 2001 estimates, implying that UMNEP in their 20s were less likely to be SNEP until the beginning of the 2000s. The results for 2006 still show that the dummy variables for the 20–24 and 25–29 age groups remained significantly negative, but the absolute values of the marginal effects were smaller than in previous years. This trend persisted in 2011: not only was the absolute value of the marginal effect of the 20–24 variable even smaller than in 2006, but the effects of the 25–29 variable ceased to be statistically significant. These results indicate that the younger age segments are losing their traditional resistance to isolation. Thus the change in age effect drives the growth of the young solitary non-employed population. On the other hand, the marginal effects of those aged 34 or under were shown to be significantly negative in 2016, implying again that UMNEP aged 35 or over, including the “employment ice age” generation, were more likely to be SNEP than the younger age group.

Another trend discussed in this chapter was how time spent in medical treatment or care apparently reduces a person’s likelihood of becoming solitary non-employed. The data from every survey year but 2001 illustrate this trend. As suggested in Fig. 2.9, living with someone who requires long-term care was a significant determinant of SNEP in 1996 and 2001 but ceased to have much impact thereafter. The significant dampening effect that living in a major metropolis had on the likelihood of becoming SNEP was evident only in 1996 and 2001.

The effects of household income varied depending on the year of the survey. In 2006, for instance, there was a bipolar trend: households earning less than 3 million yen or more than 8 million yen per year produced a lower probability of having SNEP. However, the data for the other years did not follow that pattern. There was an additional significant discovery: in 1996, only the probability that UMNEP from households earning less than 1 million yen per year would become SNEP was significantly low. In 2011 and 2016, household income had almost no consistent effect on becoming SNEP.

The independent variables controlling days of the week and weather were significant only for certain years. There was no evidence that the days of the week or the weather conditions determined whether respondents were completely alone or interacted only with family members.

Results were obtained by the multi-probit estimation

The reference of independent variable is “non-solitary non-employed”