Environmental Biotechnology For Soil and Wastewater Implications on Ecosystems 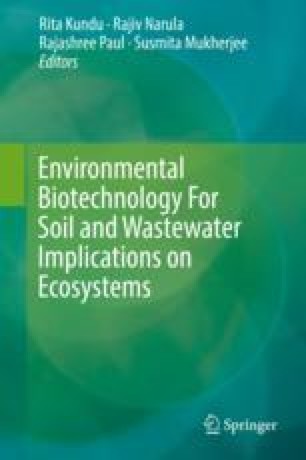 Assessment of Self Rectification Capacity of the Main Sewage Canal While Passing Through the East Kolkata Wetlands, a Ramsar Site in West Bengal, India

The self purification of polluted river water along a few kilometers down the outfall is quite considerable. But that for a flowing sewage canal is not so simple. The present study deals with the self purification capacity of the waste water canal at East Kolkata Wetlands (EKW), estimated through the changes in waste water quality parameters in different locations along a stretch of 16 Kms towards downstream. The result shows a trend of increasing pH and decreasing Total Suspended Solids (TSS) in its way towards the sea. Biological Oxygen Demand and Chemical Oxygen Demand also vary similar to those of TSS content and decrease along the passage of waste water towards downstream. Dissolved Oxygen (DO) appears after about 12 Km distance with values from 2.7 to 3.8 ppm in two consecutive locations. The efficiency of rectification capacity has been calculated as more than 80% for all these parameters. In contrast to water quality parameters, the organic carbon and organic matter content in the sediments have been found to increase gradually. This substantiates the fact that flocculation of organic matter from the overlying waste water and its subsequent sedimentation is possibly the main cause of self rectification. The initial anaerobic condition triggers rectification by removing excess organic matter through sedimentation and finally carbon sequestration. The removal of organic matter and total suspended solids permit sunlight penetration into water column and activates algal community for O2 production through photosynthesis which accelerates the rectification process.