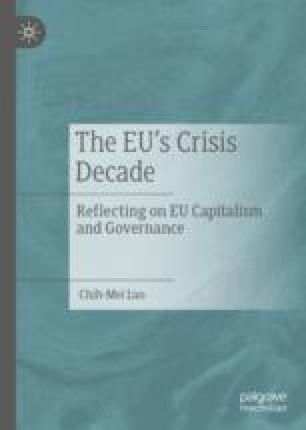 Introduction: A Crisis Decade for the EU

When the sovereign debt crisis first broke out in Greece in 2008, very few people, if any, in the world anticipated that it was only the beginning of a crisis decade for the EU. The sovereign debt crisis soon evolved from a one-off case to a wider eurozone crisis and, unexpectedly, dragged over several years. While the EU has been occupied with containing the first crisis since the eurozone was established, populist right parties (PRPs) won significant victories in the European Parliament election in 2014 in a number of non-euro crisis countries. Since then, PRPs were on a continuing rise from one general election to another, from the Netherlands, France, Austria, Germany, to Italy and Sweden. What was more shocking for EU leadership, however, was the unexpected Brexit result of the UK referendum in 2016. It was the first time that a member state was exiting from the EU since European integration was initiated more than 60 years ago.

When the sovereign debt crisis first broke out in Greece in 2008, very few people, if any, in the world anticipated that it was only the beginning of a crisis decade for the EU . The sovereign debt crisis soon evolved from a one-off case to a wider eurozone crisis and, unexpectedly, dragged over several years. While the EU has been occupied with containing the first crisis since the eurozone was established, populist right parties (PRPs) won significant victories in the European Parliament election in 2014 in a number of non-euro crisis countries. Since then, PRPs were on a continuing rise from one general election to another, from the Netherlands, France, Austria, Germany, to Italy and Sweden. What was more shocking for EU leadership, however, was the unexpected Brexit result of the UK referendum in 2016. It was the first time that a member state was exiting from the EU since European integration was initiated more than 60 years ago.

Why has 2008–2018 become a crisis decade for the EU ? Were these crisis events isolated from each other or were they interrelated? In terms of event sequencing, why did the rise of PRPs and Brexit appear after the euro crisis, and not the other way around? More importantly, did the EU manage these crises in a way that would ensure that such a painful crisis decade would not repeat in the future? These are the questions this book aims to answer and explore. It attempts to investigate each crisis individually and then to observe whether there was a causal relationship between them. A political economy perspective will be employed to explain this eventful decade for the EU , surrounding its economic governance.

This book is a collection of papers that the author has published in academic journals in the past few years and brings together her research on these crises that the EU has been experiencing in the last decade. They are arranged in chronological order. They will first start from the European sovereign debt crisis, then proceed to labour market reforms that euro crisis members have been engaging in as part of their post-crisis management, then to the 2014 European Parliament election—resulting in the rise of populist right parties—and finally to the Brexit referendum in 2016. The book will propose its own answer to the EU’s future—inclusive capitalism with reference to the Danish practices in Chap.  6. A brief introduction to each chapter is illustrated as follows.

Chapter  2 investigates why European sovereign debt crisis broke out under the existing fiscal regulation of the Economic and Monetary Union (EMU) and identifies the causes and nature of the crisis. A broad and complete survey to trace the course of the crisis was conducted in order to fully unfold the complexity of the European sovereign debt crisis. After re-establishing the whole picture, certain characteristics of the crisis were observed and were used further to dialogue with mainstream theories of European integration. After identifying the causes, natures, and characteristics of the crisis, the chapter goes on to discuss and evaluate the EU’s crisis management, mainly in the form of bailouts, fiscal compact, and austerity policies. This chapter found that the European sovereign debt crisis, with a few euro members being stuck with high deficits and high indebtedness, was oversimplified to be referred to as the euro crisis. In fact, it consisted of several individual crises with different causes. Without recognizing their differentiations in respective crises, EU leadership managed this compound crisis with one uniform policy answer—restoring fiscal discipline through austerity policies. This chapter argues that EU leadership’s mismanagement of the euro crisis would not only prolong the crisis but also worsen economic inequality within the EU.

Chapter  3 follows to discuss the other major policy that some euro crisis members resorted to in their post-euro crisis management—labour market reforms. Labour market reforms, following austerity and fiscal discipline, became another, if not the last, resort for unemployment-stricken euro crisis members to resume their growth and employment. Germany, with its record high employment rate in the EU, especially with its conspicuous employment stability during the global financial crisis and the European sovereign debt crises, stood out and its labour market reforms during 2003–2005, the so-called Hartz reforms, became the model that some EU countries looked up to. Chapter  3 is an attempt to clarify the effects of the Hartz reforms from competing arguments and identify their welfare implications for the German society and economy, so as to explore whether these kinds of reforms were suitable for the post-euro crisis management and whether they could be applicable to other EU members or not. The chapter identifies that, while effectively reducing German unemployment, the Hartz reforms have brought the German economy an increase in the size of the low-paid sector, negative wage growth, and increasing income inequality. The reforms, thus, were not qualified as welfare-enhancing because poverty levels in both the employed and unemployed increased. The chapter therefore argues that the Hartz-style reforms are neither a desirable model for other EU countries nor the answer to the EU’s post-euro crisis management in a time of fiscal austerity and negative interest rates. It warns that the mishandling of labour market reforms could result in the collapse of the already fragile public confidence in EU leadership.

After comprehending the EU’s economic governance during and following the euro crisis, Chap.  4 looks into the result of the 2014 European Parliament (EP) election. It was the first post-euro crisis election at the European level and was seen as ‘an important test of faith in the European project’. The election outcome was that anti-EU, anti-immigration populist right parties (PRPs) gained significantly and became the third largest political force in EU politics. This chapter asks three interrelated questions: firstly, why were PRPs able to rise in the 2014 EP election? Secondly, what messages were delivered from the election result to the EU leadership? Thirdly, did they read the messages correctly with right policy responses? After examining the competing interpretations, this chapter argues that deep disillusion and mistrust of EU leadership, deriving from their long neglect of deteriorating distributional justice and fairness of European integration, which became acute after the euro crisis mismanagement, explain more comprehensively the 2014 EP election results. After assessing policy responses of EU leadership, economic Europe was expected to revive, but a social Europe that could address economic inequality remained absent.

The rise of PRPs in the EU politics culminated in the Brexit result of the UK referendum in 2016. Chapter  5 looks into the issue of Brexit and its implications for European integration and beyond. In order to clarify the interrelationship between the two, it was necessary to identify whether Brexit was the outcome of a UK-specific issue or the result of more structural and general factors. This chapter identifies that Brexit and its development into a referendum issue were out of a specific national issue in UK politics. Nevertheless, the characteristics and divisions of voting behaviours revealed in the referendum—in regions, generations, educational levels, and social classes—demonstrate that it was a class divisive vote based on different economic rationales. Brexit voters and non-Brexit voters were divided along the lines between the winners and losers of market liberalization during the process of European integration. This telling fact therefore highlights a deeper structural issue—economic inequality and distributive injustice—which has been neglected since the economic liberalism has triumphed ideologically in the 1990s and has been aggravated by the mismanagement of the euro crisis. Reflections among EU leadership on Brexit, however, failed to produce any consensus on reforms or policy changes to the EU’s economic governance. Neither of the competing visions—‘more Europe’ versus ‘less Europe’—as a response to Brexit, rightly recognized the nature of the Brexit result. Again, EU leadership missed an opportunity to correct its faulty governance, and the public’s disillusion and trust crisis with EU leadership remained unsolved.

After criticizing the EU’s economic mismanagement in the previous chapters and recognizing that trade protectionism and populist nationalism became the answers from those left behind and economically disadvantaged voters to ever-growing economic inequality, this book proposes its own answer to the EU’s economic governance in Chap.  6 with a case study on Denmark’s inclusive capitalism. In order to provide a holistic, systematic, concrete policy combination, Inclusive Development Index (IDI) was employed to investigate seven policy pillars. This chapter demonstrates that Denmark has been performing well in areas surrounding acquired equal opportunities: quality public education, health, and active labour market policies for developing personal capability from childhood to adulthood on the one hand; uncorrupted public services and business-friendly legal and tax regimes for facilitating market competition from business creation and operation, especially for small business on the other. Governance played a key role in the functioning of this self-producing policy eco-system, staging at the centre as big investor and enabler for both labour and capital. The distinctive thinking underpinning this policy eco-system—treating economic policies also as social policies and vice versa—reconciled economic growth and justice simultaneously, resulting in inclusive capitalism in day-to-day realities. The chapter thus contends that the prevailing liberalist orthodoxy that guided EU economic governance was in desperate need of overhaul.