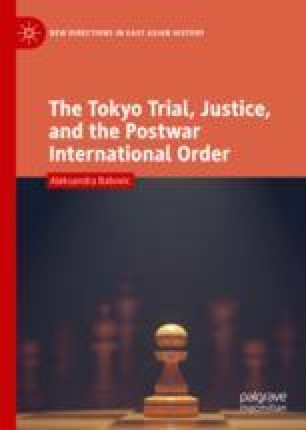 The Tokyo Trial, Justice, and the Postwar International Order pp 59-70 | Cite as

This chapter reveals the motives behind the omission of the mass atrocity committed against the population in the former colonies by the Japanese from the indictment despite the fact that the evidence was available during the Trial. Instances of rape, bacteriological warfare, human experimenting, and sexual slavery are unaddressed which comes with serious repercussions both legally and historically speaking. Babovic observes what was the purpose of partially including some of these crimes in the Indictment. The chapter also looks at the instances of Allied atrocity against Japan and shows in what way they have complicated Japan’s understanding of its own guilt.

Cite this chapter as:
Babovic A. (2019) The Partial Interest for Victims and Strategic “Forgetting” at the Tokyo Tribunal. In: The Tokyo Trial, Justice, and the Postwar International Order. New Directions in East Asian History. Palgrave Macmillan, Singapore. https://doi.org/10.1007/978-981-13-3477-1_5