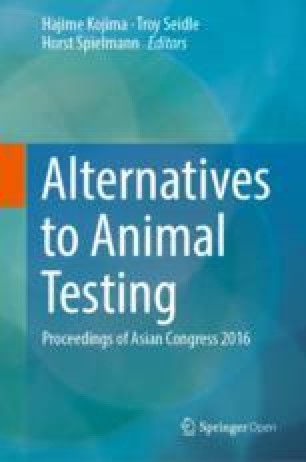 Alternative Research (3Rs) in the World, Asia and Japan

“Principles of Humane Experimental Technique” were first articulated in the 1950s by Russell and Burch (1959), giving birth to a new field of laboratory animal welfare and the “3Rs” concept of replacement, reduction and refinement in life sciences research. A decade later, the Fund for the Replacement of Animals in Medical Experiments (FRAME 2018) was founded, with a mission to support alternative research, together with the journal Alternatives to Laboratory Animals (ATLA), which has become a leading academic journal of this field.

In 1981, the Center for Alternatives to Animal Testing (CAAT) was founded at Johns Hopkins University. The center co-organized the 1st World Congress on Alternatives and Animal Use in the Life Sciences in 1993 (CAAT 2018). The first president of World Congress of Alternatives was Dr. Alan Goldberg and then he is one of the prominent leaders of this field. His remarkable effort of alternatives to animal testing in toxicology is realistic strategy for alternative research. Because the most of chemicals should be tested their safety before marketing, the toxicological study using animals was a common sense in this field. However, Dr. Goldberg proposes many non-animal testing methods for their safety.

The European Reference Laboratory for Alternatives to Animal Testing (EURL-ECVAM) (ECVAM 2018), founded in 1991 as the European Centre for the Validation of Alternative Methods, was given a new name and broader mandate in 2010 for promoting the not only scientific but also regulatory acceptance of non-animal tests which are of importance to biomedical sciences. EURL-ECVAM does so by supporting research, test development and validation, the establishment of a specialised database service, and engagement with international academic organizations in this field. Their targets include chemicals and products of various kinds, including medicines, vaccines, medical devices, cosmetics, household products and agricultural products.

The US Interagency Coordinating Committee on the Validation of Alternative Methods (ICCVAM) was established by law in 2000 (ICCVAM 2018) as a permanent committee of the NIEHS under the National Toxicology Program Interagency Center for the Evaluation of Alternative Toxicological Methods (NICEATM). ICCVAM is composed of representatives from 16 federal regulatory and research agencies that require, use, generate, or disseminate toxicological and safety testing information. The importance of alternative research is beginning to shift from scientific to regulatory needs.

The International Standardisation Organization (ISO) also created an international document “Animal Welfare Requirement” as ISO 10993-2 in 1996 (ISO 2018). This standard is for biological and clinical evaluation of medical devices and then it is revised regularly to expand their target.

In Asia, the Japanese Society for Alternatives to Animal Experiments (JSAAE) was founded in 1984 as a world-first academic society consisting of scientists for alternative research (Sugawara 1990), and today JSAAE collaborates with many international organizations in this field. JSAAE is a scientific organization that undertakes research, development, education, and surveillance activities for promoting international acceptance of the 3Rs as guiding principles for the proper use of animals in scientific testing. JSAAE has published its academic journal Alternatives to Animal Testing and Experimentation (AATEX) since 1990, making it one of the oldest academic journals in this field (AATEX 2018). The society celebrated its 30th annual meeting in 2017 (JSAAE 2018).

The 6th World Congress on Alternatives was invited to Tokyo in 2006. The congress included three satellite meetings in other Asian parts, namely Beijing, Seoul and Kyoto, making it a milestone of expansion of alternative research into Asian region. Indeed, the Korean Society for Alternatives to Animal Experiments (KSAAE) was founded that same year.

The Asian Federation of Laboratory Animal Science Associations (AFLAS) is one of other remarkable activities of alternatives research. The first congress was held in Nagasaki in 2004, with subsequent meetings every two years. In 2016 the congress was hosted in Singapore (AFLAS 2018), where subjects discussed included laboratory animal welfare and 3Rs with other subjects in laboratory animal science. The AFLAS membership is now expanded to 11.

In Japan, JSAAE has a central position to propagate 3Rs activities. The initial activities of JASSE were focused on cosmetics. However, since Japan’s Animal Welfare Act took 3Rs as key words, the concept has become well recognized by biomedical research organizations. The practical activities of 3Rs are held by the Japanese Association of Laboratory Animal Science (JALAS), the Japanese Society of Laboratory Animal and Environment (JSLAE), and the Japanese Association for Experimental Animal Technologists (JAEAT) as education and training sessions. Through these efforts, the 3Rs are now expanding to be recognized by industries.