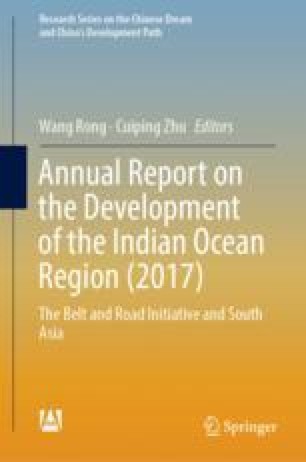 The “One Belt and One Road” initiative itself, proposed by the Chinese government, nurtures the sub-regional cooperation seeds, like the China–Nepal–India Economic Corridor. Strong earthquake striking Nepalon April 25, 2015 gave rise to such a strong demand. Although the three countries have not yet seriously negotiated the matter concerning the joint establishment of the corridor, the academic community has discussed about it for long. This article emphasizes the importance of the construction of the China–Nepal–India Economic Corridor in meeting six major demands, namely, the demand of filling up the depression development across the trans-Himalayan region, the demand of promoting the interconnectivity between China and South Asia in parallel, the demand of transferring the surplus production capacity in China, the demand of steadily propelling the establishment of a “closer development partnership” between China and India, the demand of connecting the construction of China’s One Belt and One Road initiative by land and by sea, and the demand of trying to break through the geopolitical predicament in South Asia. For China, Nepal and India, the time is ripe for promoting the corridor construction. On the one hand, the political transformation of Nepal is almost complete, providing the political security for the corridor construction. On the other hand, China and India have laid a good foundation for the corridor construction. The corridor construction will vigorously activate the geographical location advantages and cultural resources between two major markets neighboring Nepal, the world’s second most abundant water resources and the unique humanistic tourism resources brought by the Qinghai–Tibet Plateau, etc. Nevertheless, the corridor construction will not be built in one step. Instead, many challenges need to be overcome first, such as the interference from the traditional Indian geopolitical thinking, the interference of the Indian market protectionism, and the interference of various non-traditional security threats. In this regard, in the process of promoting the corridor construction, the above three countries, China in particular, shall be patient and composed enough and take into full account all the conditions such as Nepal’s tolerance and acceptance as well as India’s sensitivity and tolerance. In short, the author believes that against the backdrop that the phenomenon of anti-globalization is increasingly obvious, the free trade is stuck in a downturn, and the protectionism and populism is well popular today, China and India, two major Eastern countries, shall have the reason and the obligation to take the initiative to fill in the regional cooperation vacancy formed due to the shrinkage or even exit of the United States, the Europe and other Western countries, thus providing more public goods and resources for the regional development. The author also believes that the construction of the China–Nepal–India Economic can not only greatly promote the overall development of the region, but also fully demonstrate the images of both China and India, as two great, responsible, emerging powers.

Cite this chapter as:
Hu S. (2018) Connecting the “One Belt and One Road” Initiative with the Interconnected Himalayan Region—Reflections on the Construction of the China–Nepal–India Economic Corridor. In: Rong W., Zhu C. (eds) Annual Report on the Development of the Indian Ocean Region (2017). Research Series on the Chinese Dream and China’s Development Path. Springer, Singapore. https://doi.org/10.1007/978-981-13-2080-4_3