Water Resources and Environmental Engineering I 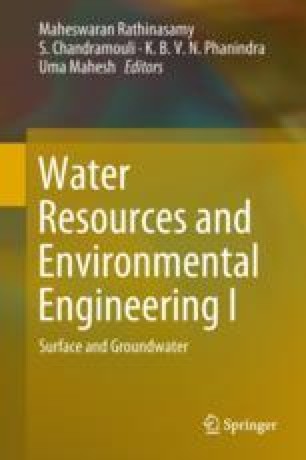 Water Resources and Environmental Engineering I pp 83-88 | Cite as

A Review on Stability of Caisson Breakwater

A Breakwater can be designed for several different purposes; the basic function of such kind breakwater is to protect the water region against waves. It provides a tranquility condition for ships to navigate, moor, and for cargo handling. These vertical structures (caisson) are more economical compared to the rubble mound breakwater, especially in deeper water depths. There is a demand to expand existing ports or to make them more profound, to provide a sufficient tranquil harbor basin in deep-water due to increasing draught of large vessels. The material required for rubble mound breakwaters increase quadratic with depth, but the volume of the caisson is less than that needed for a rubble mound breakwater because the latter increases with the square of water depth. This paper concerned the previous design and failure mechanism on caisson breakwater and highlights the future studies for such kind of breakwater.

Breakwater is constructed to maintain calm conditions in harbor basin or to maintain the stability of shoreline. Rubble mound breakwaters are of trapezoidal cross section and are built mainly of quarry stones and concrete blocks based on requirements. The selection of breakwater would be controlled by factors such as availability of rocks, depth of water, geomorphologic conditions of the seabed and the function of the breakwater. Caisson breakwaters are preferred in deeper depths as the quantities of quarried rocks increase significantly with increase in water depth which leads to increase in total project cost.

When water depths are larger than 15–20 m, vertical breakwaters are preferred. Most of the existing vertical breakwaters were constructed using the massive pre-cast cellular reinforced concrete. Caissons are floated and then towed to the desired location. These are then ballasted and sunk on to the existing mound base and weight of which can be increased by rubble, concrete or sand fill. These types of breakwaters are also known as “Upright”, “vertically composite” or “vertical faced or caisson breakwaters” [1].

The first vertical wall breakwater was constructed with a low rubble base in Naples in 1900. The vertical breakwater consisting of solid concrete blocks was first built Otaru port by I. Hirori, which lasted from 1897 to 1907 [2]. In rough seas, caisson breakwaters became the most suitable option. Wave forces and breakwater stability are the major factors which are governing the design methodologies of upright breakwater. The caissons were used as bulkheads and breakwater of many ports in Japan. Breaking waves exerts impulsive forces on an upright section of the caisson and those forces can be minimized by proper design and adoption of vertical breakwater covered with wave-dissipating blocks. Impulsive forces can also be reduced by providing a wave chamber and perforations on wave facing vertical wall. Caisson breakwaters with wave chambers are nowadays used for the base of oscillating water column. The Goda formula for design forces on vertical wall breakwaters accurately predicts forces under the most condition of wave breaking conditions [3].

A breakwater which consists of a caisson placed on a foundation with slopes on both sides and upright section of the breakwater is protected with armor block on the seaside called a composite breakwater. Figures 1 and 2 show the different types of composite breakwaters. These are used in locations where either the depth of water is large or the there is a large tidal range. In such situations, the quantity of the rubble stone required to construct a breakwater is very high and hence caisson breakwaters are preferred in that case.

Apart from the above aspects, the vertical breakwater has to check for shear, liquefaction, etc. In stability calculation of breakwaters, the external forces such as the wave forces, hydrostatic pressure, buoyancy, and dead weight shall be considered.

Wave forces: For stability determination for a breakwater, the wave loads on all four sides have to be taken into consideration. Also, shock pressures have to account for are considered.

Buoyancy: For the structural section of breakwater below the still water level, the buoyancy shall be considered. Dead weight: the dead weight of the breakwater may be calculated by using the unit weights of respective materials on the assumed section.

From the past studies, it is known that failure of caisson breakwaters is mainly due to sliding which is caused by impulsive wave forces acting on them. The three major reasons for failure are inherent to the structures itself, prevailing hydraulic and load conditions and the foundation and seabed morphology. The results suggest, the stability of vertical breakwater is a complex phenomenon, which can be solved by dynamic analysis and probabilistic design approaches. The disasters (such as sliding, failure of foundation etc.) occurred to vertical breakwaters are because of formation of clapotis due to wave reflection and impulsive forces exerted by the breaking waves [5].

Forces due to wave loads acting on vertical wall/caisson breakwaters arise from hydrostatic forces, hydrodynamic forces, uplift forces, geotechnical forces/reaction from supporting soil and internal water pressure. Geotechnical and wave forces are resisted mainly by the self-weight and friction between the supporting foundation [4].

Toe armor size, wave height, wave period, wave run-up, wave rundown and standing wave are the parameters influencing the stability of toe in front the vertical wall. Damage level increases with a decrease in toe armor size and increases in wave and wave period [8]. Placing an offshore structure on the seaward side of caisson/seawall can reduce the wave pressures on them. An increase in height of protecting offshore structure reduces the wave pressure on seawall/caisson. Irregular waves will be created even with regular wave attack if there is a presence of breakwater in front of caisson [9]. The results from the wave flume experiments on vertical wall breakwaters under regular and irregular wave attack are compared with Goda formula and found that Goda’s theory is offering greater safety factor [10].

Esteban et al. [12] carried out laboratory experiments on caisson breakwater for sliding and tilting and observed the values for three storms of similar intensity. The authors also compared the experimental results with their computer model results and found the computer model studies are overestimating the deformation for first storm only and for remaining subsequent storms the values estimated are in the magnitude of the values obtained in a laboratory test. The authors concluded that this model can be used for estimation of final tilting and sliding.

Mase et al. [13] studied the displacement of wave-dissipating blocks, wave pressure and sliding of caisson type breakwater and related these three parameters. Authors found that sliding distance is more with blocks where repairing was not done than in the case, where the repairing was done and they also found if repairing is done after 5% damage, there will be a great decrease in caisson sliding distance.

Ruol et al. [14] measured uplift and horizontal wave pressures simultaneously with the movements of the caisson. He conducted experiments on different weights and geometries of caisson against both regular and irregular wave attack and found that existing formulae and experimental study gave nearly same results under breaking wave. Slotted vertical barriers are much cheaper than the rubble mound breakwaters as materials required for vertical slotted barriers is about 10% of material required for the rubble mound breakwater. Dynamic pressures acting on such barriers should be estimated accurately to make them more cost effective. Especially near still water, an increase in porosity leads to decrease in dynamic pressures [15].

In this paper, an attempt is made to summarize the previous work carried on caisson structures and the failure mechanisms of such structures. Nowadays the need of caisson type breakwater are increased due to the increasing draught of vessels, the flexibility of the structures drawn the attention to such kind of breakwater. Especially in deep-water compared to other kind of structures, the caisson structures are realized cost effective and saving the time constraints in construction. The stability of caisson type breakwaters is a complex phenomenon and it is dependent on its self-weight and frictional resistance between base of caisson breakwater and foundation, strength of foundation, permeability characteristics of foundation bed material. Changes in climatic condition give rise to the sea level which should also be considered for the design approaches. Oscillating water columns can be installed over the caisson breakwaters on seaward side. The abrupt collapse of structures is often progressive; by understanding the hydrodynamic behavior of structure, it could be prevented.

The authors are thankful to the Director of National Institute of Technology Karnataka and Head of Dept. of Applied Mechanics and Hydraulics of the institute for providing access to wave flume facility and for their continuous support. Also, the authors gratefully acknowledge the financial assistance provided by Ministry of Earth Sciences under ESTC-COT cell, Govt. of India.