Quantum Reality and Theory of Śūnya 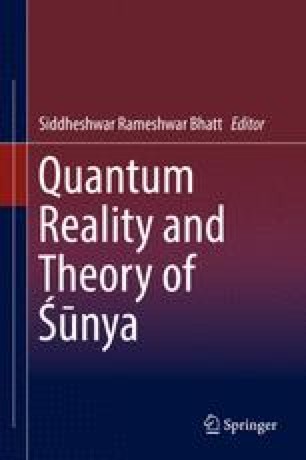 In modern physics, the properties like charge, spin, etc. of elementary entities like electron, proton, photon, etc. are considered to be “intrinsic properties” of the entity. Intrinsic properties are those properties that a thing possesses, irrespective of whether or not there are other contingent things. In Buddhist philosophy especially in Mādhyamik philosophy, no such concept of “intrinsic property” or svabhāva exists. The problem of origin of the universe baffled the scientists and philosophers for many centuries. Within the framework of general theory of relativity as discovered by Einstein, the origin and structure of the universe were discussed in a comprehensive manner. According to the recent formulation of cosmology (i.e., the origin and structure of the universe), the universe originates from the fluctuations of the quantum vacuum. Vacuum in modern physics is not exactly nothing but rather a “something called nothing,” meaning that it is replete with activity governed by the principle of quantum theory. From philosophical perspective, what is significant is the division of creative conceptions into those which assume that the universe arose from “nothingness” in the strong ontological meaning of the word vs. those which lead to the conclusion that it was originated from a certain “poorer” physical reality, usually called “quantum vacuum” or space-time endowed with fluctuation. This vacuum or ontologically speaking a substratum exists which is devoid of any matter but full of activities or full of potentialities. Special theory of relativity is based on two axioms, one of which is the speed of light taken as constant and maximum.