War and Its Ideologies 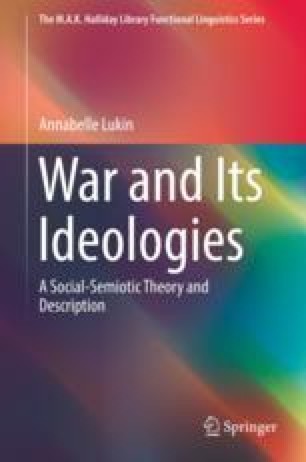 A Counter-Ideology: War as Violence

The focus of this chapter is the analysis and interpretation of a news article which displays a contrasting orientation to the reporting of the invasion of Iraq presented in the previous chapter. In this news article, written by veteran foreign correspondent Robert Fisk , the invasion is characterised not as war but as violence. With the lexical item violence comes a very different clusters of semantic features. The actions of the belligerents are construed as highly destructive and unilateral. Official views are not only eschewed but critiqued. The text also makes very visible the humans who are the witnesses of the violence, and who will suffer its many consequences. The subjectivity of the author is not obscured. Instead, it provides a position from which the violence can be made rational only by reference to the powerful national interests it serves.

Orientation Contrast Metafunction Grammar Systems Iraqi Information Minister Process Clause
These keywords were added by machine and not by the authors. This process is experimental and the keywords may be updated as the learning algorithm improves.