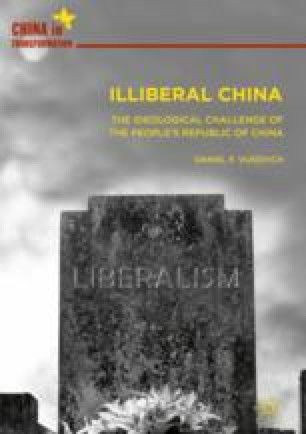 The People’s Republic of China (PRC), ‘China’ as a political entity, state, and intellectual political culture, is a problem. It infuriates and fascinates, perplexes and amazes. On that the Party and its liberal critics inside and abroad (where they are far more numerous) might well agree. And yet what an odd thing to proclaim, this problem, when as both sides might again nod—in obeisance to the hegemony of the market and profit motive—that same Party-state has lifted several hundred millions of people out of poverty. The latter is demonstrably true when one credits the Mao era foundations, let alone the life expectancies on the eve of the 1949 revolution. The PRC—which is to say the Communist Party-state, before and after Mao—has clearly returned China to the forefront of global recognition and power since the 1980s. The rise of China may be a cliché partially belied by its problems and iniquities, and by its per capita gross national product (GNP; China ranks 80th in the world as of 2014). But clichés nonetheless exist in a certain, significant relationship with truth and social reality. China has ‘arrived’ and is more like a bank that is too big to fail than a teetering state on the brink of collapse. Of course that same Party-state system has also plunged its people into a highly polluted and unequal modern society—a society rife with authoritarianism, excessive policing of speech, and heavy-handed, if ultimately failing, censorship. A society with little ‘soft power’ and approval in the Western metropoles of the former colonial world, and increasing disapproval in its southeast Asian periphery, thanks to its short-sighted governmental bullying and fear of American bases.

Party-state System Illiberal Regimes Chinese Politics Preceptor System Chinese Feminist
These keywords were added by machine and not by the authors. This process is experimental and the keywords may be updated as the learning algorithm improves.
This is a preview of subscription content, log in to check access.