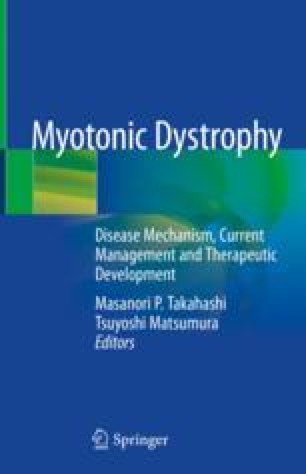 Although patients with myotonic dystrophy (MyD) present with various neurological and psychiatric symptoms, the pathogenesis has not been elucidated. Therefore, we performed a detailed clinicopathological examination of 34 patients with MyD (24 men and 10 women) and statistical analyses. The average age at death was 57.6 years (range, 41–74 years). Mild proportional atrophy generally occurred in the cerebrum, although some cases exhibited normal external appearances. The mean brain weight was 1152.6 g (range, 900–1490 g). Neurofibrillary tangles (NFTs) were observed in the entorhinal to transentorhinal cortices in all cases and were generally extensively distributed. Although the observed NFTs were considered abnormal when patient ages were considered, the number and distribution varied between the cases. Regarding the NFT staging, as described by Braak et al., 8 cases were Stage I, 16 cases were Stage II, 9 cases were Stage III, 1 case was Stage IV, and there were no Stage V or Stage VI cases. In contrast to NFTs, senile plaques were rarely observed. Characteristic eosinophilic cytoplasmic inclusions in the thalamic nuclei (thalamic inclusions) were detected in most cases, although the numbers also varied between patients. Similar eosinophilic inclusions were also detected in the substantia nigra of some patients. Furthermore, the number of Marinesco bodies generally increased. Additionally, myelin pallor was observed in the deep cerebral white matter, and dilatation of the perivascular spaces and hyalinized vessels was remarkable in the cerebral white matter in some cases. These findings suggest that various neuropathological changes contribute to the neuropsychiatric symptoms of MyD. Our statistical analyses indicated that the number of CTG repeats and Braak NFT stages were not significantly correlated, whereas both age at death and disease duration were significantly correlated with Braak NFT stages. The number of CTG repeats was not significantly correlated with either age at disease onset or disease duration, whereas disease duration and brain weights were significantly correlated. The present investigation demonstrated that neuropathological changes are heterogeneous in patients with MyD, suggesting that the pathological mechanisms of MyD are complex and multifactorial.

This research is partially supported by the Strategic Research Program for Brain Sciences from Japan Agency for Medical Research and development, AMED.

The author has no conflicts of interest to declare.