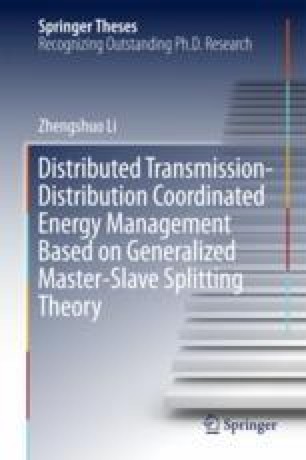 This book investigates TDCEM that coordinates TCC and DCC operation. To model various functions in the TDCEM, G-TDCM is established as an optimization problem that is generally fit for main functions in EMS softwares. A new distributed computation theory, called G-MSS, is proposed to solve the G-TDCM in a distributed fashion. The kernel of the G-MSS theory is an HGD method, which is inspired by the operational characteristics of TCCs and DCCs. The HGD method heterogeneously decomposes the optimality conditions of the G-TDCM, by which the transmission subproblems and distribution subproblems are constructed. The subproblems are then distributedly solved by TCCs and DCCs, with only limited boundary-bus information to be exchanged. The HGD method is proved to have a conditionally local first-order convergency rate and the convergent solution satisfies the first-order optimality conditions of the G-TDCM. Hence, the convergent solution must be global optimal for convex optimization. Furthermore, to make the G-MSS computationally more efficient, several modified HGD methods with a faster convergency are proposed. Particularly, a DPS-response-function based HGD method has a superb convergency for a distributed GPF problem, and a TPS-response-function based HGD method has a superb convergency for an ED problem.