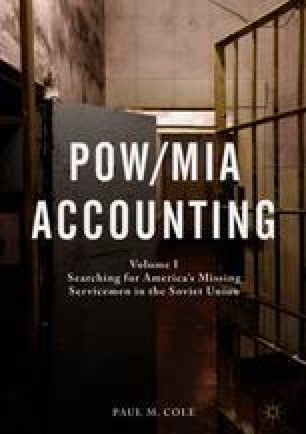 This chapter summarizes the most salient findings and conclusions derived from our search for American POW/MIAs in Russia, four non-Russian republics of the Soviet Union, and East Germany.

Significant findings included the following: (1) Soviet forces interrogated American POWs in Korea, though the Russians deny it. (2) Multiple lines of evidence indicate that American POWs were transferred from Korea to the Soviet Union, some of whom appear to have been returned to POW camps in North Korea. (3) Evidence in the East German archives and from interviews confirm that American deserters were transferred to East Germany and the territory of the USSR. (4) No evidence of any kind was located in five former republics of the USSR that indicates over 23,000 American POWs were transferred to the Soviet Union after World War II.

American Power Soviet Intelligence Exemption 25X1 English Traits Colonel
These keywords were added by machine and not by the authors. This process is experimental and the keywords may be updated as the learning algorithm improves.
This is a preview of subscription content, log in to check access.