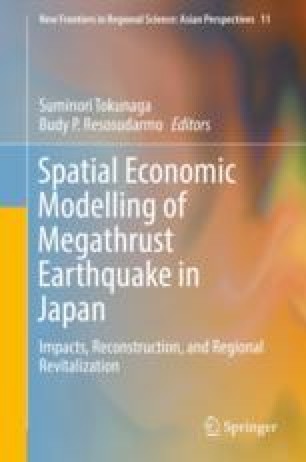 Economic Impacts of Population Decline Due to the Great East Japan Earthquake: An Inter-regional Input–Output Approach

The Great Earthquake of March 11, 2011, significantly damaged the Tohoku region in Japan. Particularly, Fukushima Prefecture is still suffering from the impacts of the Great Earthquake and the nuclear power plant accident and the consequent evacuation of numerous people. It is considered that the population decline due to deaths, those declared missing, and evacuation has a negative impact on the regional economy through a decline in consumer demand. Therefore, using a 47-region inter-regional input–output table at prefecture level, we analyzed the economic impacts of the population decline for the past 5 years after the Great Earthquake. Consequently, it was observed that the impact was spread across the country. In particular, while the amount of production in the Tohoku region, including Fukushima, decreased, that of the Kanto region, including Tokyo, increased because many evacuees moved from the three affected prefectures and then became consumers in their new region. In addition, it is considered that the population decline will continue in the affected area in the long term. Therefore, based on population projections that consider the impact of the earthquake, we analyzed its long-term economic impacts. Consequently, it is shown that in the worst case, production in Fukushima in 2030 will decline by 15.4% compared with 2010. Thus, there is concern that the population decline in affected regions, such as Fukushima, will continue in the long term, and the regional economy will decline.