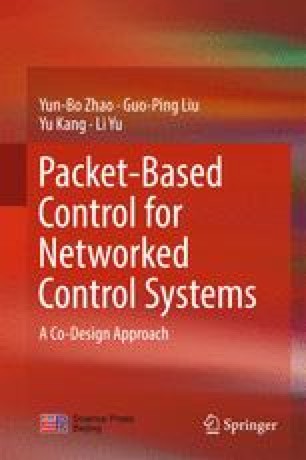 Following the extension of the packet-based control approach to networked Hammerstein systems in Chap.  3, another extension readily follows which is the category of output nonlinear systems described by the Wiener model, where a static nonlinear output process is present in the system. For this type of nonlinear systems, the two-step approach proposed in Chap.  3 can still be applied to separate the nonlinear process from the system, thus enabling the packet-based control approach to be implemented in this case. Different from the input nonlinearity case, a specially designed observer is proposed for the implementation of the two-step approach to networked Wiener systems, and as a result, the stability criterion of the corresponding closed-loop system depends not only on the communication conditions but the error of the observer.

Packet-based Control Output Nonlinear Systems Wiener Model Closed-loop Stability Stability Criterion
These keywords were added by machine and not by the authors. This process is experimental and the keywords may be updated as the learning algorithm improves.
This is a preview of subscription content, log in to check access.