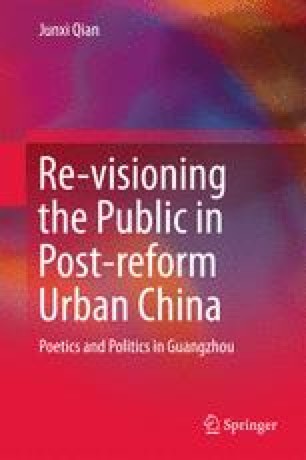 Underneath a freeway overpass, on a vacant concrete traffic island in the middle of bustling Beijing, forty Chinese women in their sixties and seventies, dressed in silk brocaded jackets and padded silk pants, slowly waved lime-green handkerchiefs and fluttered hot pink, white, and green striped fans above their heads…They followed an undulating and circulating pattern, dividing into two rows, then reuniting to form one big group.

Public Performer Public Leisure Spaces Dance Site Rural Migrant Workers Dance Teacher
These keywords were added by machine and not by the authors. This process is experimental and the keywords may be updated as the learning algorithm improves.

A revised version of this chapter has been published as:

In this chapter, the use of the term “public man” echoes Richard Sennett's (1977) work on “the fall of public man” in late modernity, since Sennett’s series of works focused directly on the constitution of the self in relation to the presence of others. I frankly admit the gendered bias which the term “public man” risks conveying. In People’s Park and North Gate Square, both men and women are active participants in an emerging grassroots public sphere; and in many cases, the presence of women is even more salient than that of men. Therefore, in this chapter I use the term “public man” in a broad sense, which is inclusive of men, women, and other potential gendered identities.