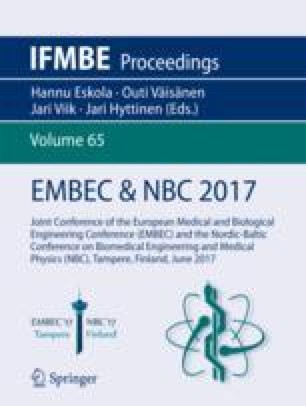 Non-contact sensing technology can allow quantitative measurement of sleep beyond the hospital setting, in a user-friendly and cost-effective manner. Wrist actigraphy has been extensively validated as an alternative to polysomnography (PSG), the gold standard in sleep monitoring. Results reported in the literature indicate actigraphy-based devices to be highly sensitive but poorly specific to sleep, without providing a breakdown of sleep into different stages [1, 2]. In this study, the sleep staging performance of a novel non-contact sensing technology was compared to PSG on healthy subjects. Forty subjects were recruited for this study, and a single night of their sleep was monitored using PSG and the non-contact sensor. Three experts scored the PSG data, and a consensus scoring was derived using a voting mechanism across the three scorers. Data were split into training and testing sets and proprietary algorithms were developed using the training set. The analysis presented in this paper refers only to the independent testing set. Inter-scorer variability of each scorer was assessed against the consensus scoring and compared to values quoted in the literature. PSG scoring for this study compared favorably to the scientific literature. The non-contact device algorithm produced good performance compared to PSG. No statistically significant difference in total time for each sleep stage, in sleep onset or sleep efficiency was observed. Furthermore, performance of the non-contact device in detecting Wake, REM and N3 sleep stage was superior to that reported in the literature for wrist actigraphy. The non-contact sensor technology presented can provide a viable alternative to PSG in the home environment, allowing reliable monitoring of long-term sleep trends.