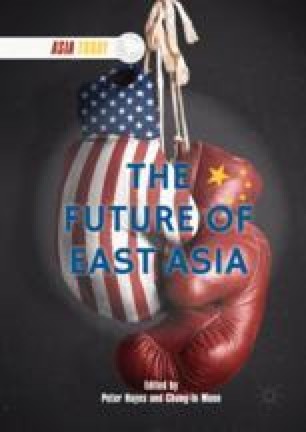 The Future of a Nuclear Weapons-Free Northeast Asia

In this chapter Peter Hayes explores the relationship between nuclear weapons in existing, emerging, and prospective regional communities. First, the author outlines how nuclear threat is woven into inter-state relations in the Northeast Asian region and constitutes a defining dimension of what may be termed a regional “anti-community” based in part on the threat of nuclear annihilation. Next, he identifies sources of strategic instability that could disrupt nuclear command-and-control systems and increase the propensity of one or more nuclear-armed states to escalate to nuclear attack.

He argues that the US-DPRK (Democratic People’s Republic of Korea) conflict relationship poses the most serious threat that nuclear war could occur, involving not only these two parties, but other nuclear and non-nuclear states in the region, suggesting the DPRK’s nuclear strategy at this early stage is primarily political in nature, and might be turned around, but could also lead to some terrible outcomes if not forestalled and reversed in the near future.

A Northeast Asian comprehensive security settlement and a regional nuclear weapons-free zone could bring about an end to such nuclear threats, suggests Hayes. It is in the interests of all states in the region to create a NWFZ, he argues, as it is the only way whereby states can create a stabilizing framework within which to manage, reduce, and eventually abolish nuclear threat in Northeast Asia, including those aimed at and coming from the DPRK.

Unless a comprehensive security system and a regional NWFZ induce these nuclear weapon states to reduce their nuclear armaments over time, Hayes fears the region will remain trapped in Cold War dynamics, with each country unable to transcend the identities defined by realist, military dominated nation-states, in spite of burgeoning cultural, social, economic, and ecological interdependence.

Since 1950, American nuclear leadership was based not only on its uniquely capable nuclear forces, but on a shared vision of a liberal international order supported by strategic nuclear deterrence aimed at containing illiberal states, most importantly the former Soviet Union. The concept of nuclear hegemony extends Cox’s Gramscian theory of global political economic hegemony and applies it to the realm of global nuclear security.52 Nuclear hegemony was the necessary complement to economic hegemony for a global superpower.

In this hegemonic framework, the United States and its allies negotiated their divergent interests in how to offset nuclear threats in joint, multilateral institutions or bilateral alliances whereby the hegemonic state secured the consent of the allies to its leadership role. Hegemony combined securing consent in the form of a shared nuclear ideology that rationalizes nuclear strategy with the institutionalization of nuclear-extended deterrence in the form of multilateral nuclear alliances in Europe and bilateral nuclear alliances in Asia. In Europe, this institutionalization resulted in the integration of command structures and force elements all the way down to low-level units whereby allies would deliver nuclear weapons provided for their use at the last moment by American forces. In Asia, the United States retained sole control but relied on allies to provide security and logistical support for some ground-based weapons and built an array of joint intelligence and communication systems to support nuclear operations. To sustain the whole enterprise, the United States committed its peerless strategic nuclear forces to protect not only itself, but its allies.

This hegemony was never complete. Some states kept out outside the system; some retained control but stayed in the alliance under American leadership. Civil society revolted and forced out nuclear weapons in Japan, South Korea, and New Zealand, for example. In spite of these exceptions, at its peak in the mid-nineteen eighties, American nuclear hegemony encompassed North America, Western Europe, and Asia-Pacific allies in a coordinated alliance system, and it provided the multi-national power basis for first containing the Soviet Union and later China, and then constructed global nuclear arms control treaties aimed at restraining horizontal proliferation and, later, limiting vertical proliferation by the then two superpowers.

Today, the era of outright American nuclear hegemony is clearly ending. The result is a generalized crisis that affects all levels of nuclear hegemony. As Gramsci stated: “The crisis consists precisely in the fact that the old is dying and the new cannot be born; in this interregnum a great variety of morbid symptoms appear.”53 President Trump’s rise to power is exactly one of these morbid symptoms.

His inauguration as nuclear commander-in-chief realized many of his critics’ worst fears. Mr. Trump made many, often contradictory, ill-informed, and factually incorrect statements about nuclear weapons during the presidential campaign.54 The statements gave rise to two urgent concerns.

The first is that Mr. Trump can somehow bring about nuclear war all by himself because he has sole presidential authority over American nuclear weapons and he is ill-equipped for this responsibility.55 That he can do so is literally true and was made so intentionally in the US nuclear command-and-control system to sustain the credibility of strategic nuclear deterrence .56 Mr. Trump did not make this system, however. He inherited a massive “triad” of nuclear forces that previous administrations endowed with a decision-making logic so compressed in time and trapped in such rigid standard operating procedures that no human, let alone someone as challenged by his own demons as Mr. Trump, can make “rational” decisions under duress. When Mr. Trump was briefed on the nuclear fire codes, he said: “I have confidence that I’ll do the right thing, the right job. But it’s a very, very scary thing.”57 Unfortunately, his first weeks in office did not inspire confidence that this self-assessment is accurate.58

A second, less apocalyptic concern about Mr. Trump as nuclear commander is that rather than starting a nuclear war by mistake, he may damage, even destroy American nuclear alliances. In particular, he may subvert nuclear extended deterrence by making untimely and imprudent threats that are wildly disproportionate to the stakes, inviting the adversary to call the bluff and raise it one by crossing a red line or refusing to reverse course,59 forcing the United States to back down—as has arguably occurred already in the case of North Korea.60 Mr. Trump already fell into this trap after Kim Jong Un’s January 1, 2017, promise that North Korea will test a long-range missile. The next day Mr. Trump tweeted: “won’t happen!”61 The only way Mr. Trump can stop this test would be to attack the launch site, which would risk reigniting the Korean War and Chinese and Russian condemnation of such an attack. (He could try to shoot down a missile mid-course but the likelihood is that US anti-ballistic missiles would miss, which would make the fading hegemon look worse than doing nothing at all.)

Mr. Trump’s nuclear policies are likely to result in chaos and confusion rather than clarity and caution. The very idea of strategic stability in the relationships between nine nuclear weapons states, their allies, and their targets, and a core element of a hegemonic vision of the role played by nuclear weapons in inter-state relations, no longer has a fixed meaning. Even if Mr. Trump were to act prudently and only use American nuclear forces defensively and in a recessed manner in relation to other nuclear states—the best imaginable case—he is already contributing to increasing nuclear complexity in ways that will certainly lead to strategic surprises and hasten the end of hegemony.

If he proactively abandons the United States nuclear hegemonic role and plunges into its interregnum, Mr. Trump may lower the nuclear threshold between all states to the point that one of them triggers an inadvertent nuclear war, even if Mr. Trump never orders the use of a single American nuclear weapon.

The countervailing logic, one based on a positive peace derived from efforts to build global and regional community rather than a negative peace of denial of the other based on genocidal deterrence, can only originate from below, via networked communities and cross-border communication involving cities, social movements, and corporations, in partnership with non-nuclear states seeking a new foundation for strategic stability. At critical moments of maximum nuclear risk during the Cold War just these kinds of civil society and even states confronted American nuclear hegemony in the United States itself, in Europe, and in the Asia-Pacific region—especially in Japan and South Korea—and succeeded in forcing the hegemon to retreat.

It is not a given that such non-state and state actors will mobilize again, let alone that they will succeed in blocking Mr. Trump from starting nuclear wars. But to do so effectively, they also must resolve enduring conflicts inherited from the past that now involve nine hair trigger nuclear arsenals, all of which are linked directly or indirectly to the American nuclear arsenal. These actors must invent and find new ways to supplant rapidly receding American nuclear hegemony with a post-nuclear global security community, one based on networked interdependence instead of nuclear threat.

To achieve a nuclear weapons ban, these groups must recognize the centrality of striking comprehensive security settlements between nuclear and non-nuclear-armed states in regional conflicts as well as between China, Russia, and the United States at the global level. Integral to a comprehensive security strategy is the laying of a global mosaic of nuclear weapons-free zones that will enable all states to immediately reduce the salience of nuclear threat to inter-state relations, especially in Northeast Asia.

If Mr. Trump is serious about avoiding nuclear war, then he may take note of the emergence of a global coalition between non-nuclear states and partner non-government organizations aimed at creating a global convention to ban all nuclear weapons.62

Such a treaty would overcome the discrimination that is at the heart of the Nuclear Non-Proliferation Treaty, that is, the distinction between nuclear weapons in have and have-not states. The only way for Mr. Trump to replace nuclear hegemony without increasing the threat of nuclear war is to withdraw from nuclear alliances and swing the United States behind this coalition. Then and only then, could he end nuclear hegemony without risking inadvertent nuclear war.