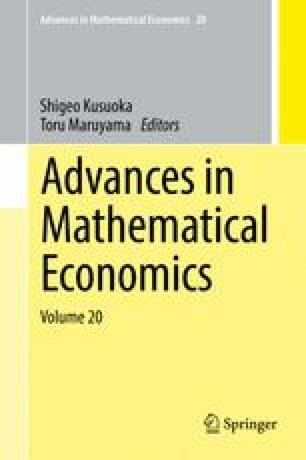 On Differentiated and Indivisible Commodities: An Expository Re-framing of Mas-Colell’s 1975 Model

With a pure exchange economy and its Walrasian equilibrium formalized as a distribution on the space of consumer characteristics, Mas-Colell (J Math Econ 2:263–296, 1975) showed the existence of equilibrium in a pure exchange economy with differentiated and indivisible commodities. We present a variant of Mas-Colell’s theorem; but more than for its own sake, we use it to expose and illustrate recent techniques due to Keisler-Sun (Adv Math 221:1584–1607, 2009), as developed in Khan-Rath-Yu-Zhang (On the equivalence of large individualized and distributionalized games. Johns Hopkins University, mimeo, 2015), to translate a result on a large distributionalized economy (LDE) to a large individualized economy (LIE), when the former can be represented by a saturated or super-atomless measure space of consumers, as formalized in Keisler-Sun (Adv Math 221:1584–1607, 2009) and Podczeck (J Math Econ 44:836–852, 2008) respectively. This also leads us to identify, hitherto unnoticed, open problems concerning symmetrization of distributionalized equilibria of economies in their distributionalized formulations. In relating our result to the antecedent literature, we bring into salience the notions of (i)“overriding desirability of the indivisible commodity,” as in Hicks (A revision of demand theory. Clarendon Press, Oxford, 1956), Mas-Colell (J Econ Theory 16:443–456, 1977) and Yamazaki (Econometrica 46:541–555, 1978; Econometrica 49:639–654, 1981), and of (ii) “bounded marginal rates of substitution,” as in Jones (J Math Econ 12:119–138, 1983; Econometrica 52:507–530, 1984) and Ostroy-Zame (Econometrica 62:593–633, 1994). Our work also relies heavily on the technical notion of Gelfand integration.

This research is supported by a Grant-in-Aid for Scientific Research (No. 15K03362, Suzuki) from the Ministry of Education, Culture, Sports, Science and Technology, Japan. This work is part of a joint project on “General Equilibrium Theory with a Saturated Space of Consumers” with Nobusumi Sagara of Hosei University; the authors thank him for all his input in this paper, and express their regret that he did not think it enough to accept co-authorship. A preliminary version was prepared when Khan was visiting the Shanghai University of Finance and Economics (SHUFE), and he thanks Haomiao Yu and Yongchao Zhang for stimulating conversation and encouragement. This final version has benefited substantially from an anonymous referee’s emphasis on the need for replacing the assumption of overriding desirability of “every homogeneous commodity” to a single money-like commodity; and the Editor’s insistence that the authors take a stand on reporting the work as a technical note for a narrow specialized readership or as an expository essay for a general audience.

In this section, we collect some mathematical results for the readers convenience.27 The following is easy to see from Diestel and Uhl [16], pp. 53–54.

It is easy to prove

Let K be a compact metric space. The weak* topology of ca(K) is separable and norm bounded subsets of ca(K) are compact and metrizable, in particular, the set of probability measures on K is compact with respect to the weak* topology.

The next fact reveals a striking property of the saturated space (Keisler and Sun [31, Definition 2.2]).