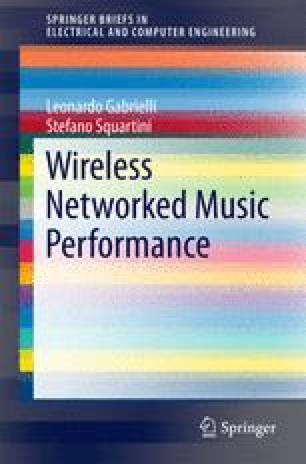 As reported in Chap.  2, at the moment of writing wireless networking is still to be fully exploited for networked music performance. Some attempts to use IEEE 802.11 networking for laptop orchestras are reported, but no technical achievements are described and performances have not been evaluated. On the contrary, it seems that there is very little confidence with wireless networking for NMP and most authors relied on commodity hardware and had limited usage of wireless networking. Wireless audio networking and wireless NMP are, thus, open fields for exploration. The works covered in this book, mainly contributed by the authors, show the feasibility of the concept with a relatively low engineering effort for demonstration and live usage, but many issues are open for thorough exploitation of the wireless medium and improved integration with existing software and composition frameworks. The possibilities opened by the availability of networking technologies able to sustain wireless audio transmission are vast and are worth investigating. Indeed, wireless NMP deserves attention as it provides an exceptional means to value indoor and outdoor spaces, monuments or parks, and opens up new possibilities of expression for composers and performers. The development of wireless technologies may improve on everyday usability of music technologies such as controllers, effect processors, or studio recording and mixing devices. More details on current issues and possible avenues for research in wireless NMP are provided in this chapter.