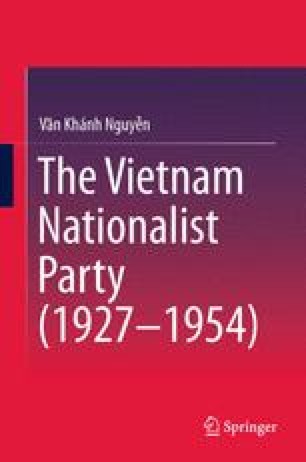 The analysis of the recovery of the VNP has shown a broader view about VNP’s activities after the Yen Bai uprising until the end of First Indochina War in 1954. In this chapter, the author presented a series of evidences in which demonstrated the ideological divide of the participating members. In fact, this issue about the activities of the organization itself after the Yen Bai uprising has not been studied before, especially in both domestic and overseas. Author also defines the characteristics of these objectives in contrast to the revolutionary process in Vietnam. From 1947 to 1954, the existence of VNP gradually depredated and completely disintegrated was not inevitable.

Political Party Communist Party Party Member French Colonialist National Liberation
These keywords were added by machine and not by the authors. This process is experimental and the keywords may be updated as the learning algorithm improves.
This is a preview of subscription content, log in to check access.