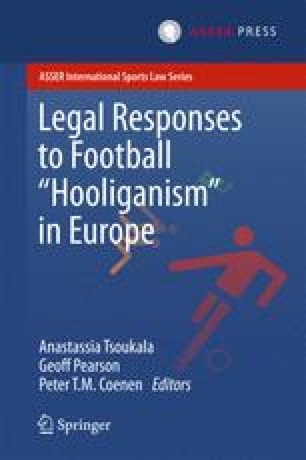 Conclusions: Social Control at the Expense of Civil Liberties and Human Rights

Despite significant differences in both fan culture and the problems of violence and disorder in connection with football, there has been a convergence of legal and policing tools designed to manage football crowds across Europe. Set in a wider neoliberal political context, where there is an increasing emphasis on prevention and security at the expense of more traditional modes of criminal justice, the management of football crowds across Europe has seen the introduction and development of pre-emptive policing powers, administrative ‘control orders’, and the gathering and sharing of personal information on suspected ‘hooligans’. This increasing social control of football crowds has been at the expense of both traditional state civil liberties and also human rights under the ECHR. These security-centric approaches to football crowd management are disproportionate to their human rights infringements given the actual extent and severity of the problem of football disorder and violence, and the existence of less restrictive—and more effective—alternatives.