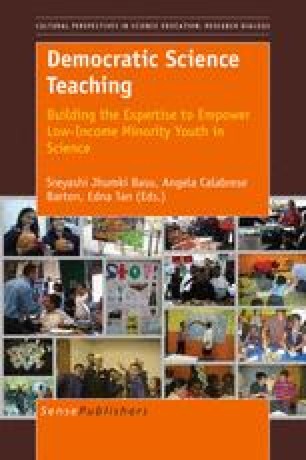 Each day I would walk into my class at a public school in a Caribbean neighborhood in Brooklyn, I would believe that my students could and would become leading scientists of their generation and smart, articulate citizens able to shape the directions in which science led their world; young people who would use science to make change in the world. And yet, time and again, I noted reality. Amidst a discussion of radioactivity, a knock-down fight broke out in my classroom between two intelligent, confident girls. A previously-incarcerated student who had spent hours after-school powering motors with solar panels was arrested for assault, moments before he was to proudly present his findings at the annual science fair. This recidivism occurred despite hours of individualized support from his teachers and father. He spent time in prison rather than preparing for his dream career in mechanical engineering. A medicine and engineering course I taught evolved into a time for “literacy-building,” undermined by a national emphasis on reading and math. A student deeply engaged with robotics had to “choose” between a science course and his special education services.

Science Education Science Teacher Science Classroom Science Class Cogenerative Dialogue
These keywords were added by machine and not by the authors. This process is experimental and the keywords may be updated as the learning algorithm improves.
This is a preview of subscription content, log in to check access.