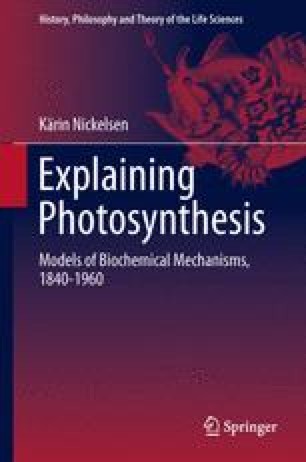 This book is a fresh attempt to contribute to a history of science that constructively uses philosophical concepts and approaches. At the same time it advocates a philosophy of science that relies on actual historical study. It deals with the elucidation of the photosynthesis mechanism in the years 1840 to 1960: a process that so far has hardly been studied in the history of science. The main systematic question is how scientists formulated, justified, modified, confirmed or criticised models of biochemical and biophysical „mechanisms”. In the past decade, the latter term has received enormous attention in the philosophy of science. There is, by now, a prolific discussion on the question what mechanisms are and how the mechanistic perspective relates to classic philosophical issues, such as laws, regularities and causation. But surprisingly little work has been done on the question of how models of mechanisms were actually construed. Valuable approaches were suggested by, among others, Bechtel, Richardson, Darden and Craver, which are integrated into this book and developed further. It is assumed that the modelling of a mechanism is best interpreted as series of coordinated research actions, dependent on a network of super- and subordinated epistemic goals, and guided by recurrent heuristic strategies. Well-known candidates of these strategies, such as modularisation and schema instantiation, are recognised, while the study digs deeper into historical detail and context than its predecessors. It also widens the perspective from the individual researcher to the communities of scientists and looks at collective research heuristics within various disciplines.

mechanistic philosophy models of mechanisms history of photosynthesis philosophy of biology heuristic strategies life sciences
This is a preview of subscription content, log in to check access.