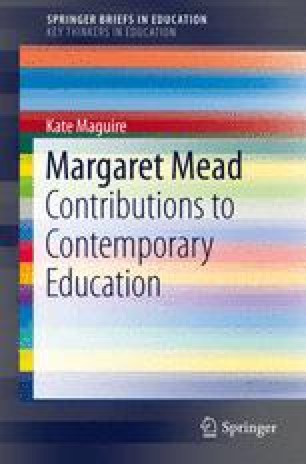 Reconfiguring Relationships with the Young Supermodernity

Margaret Mead was not a theorist. She was an applied social thinker. She had a healthy respect for certain established systems as being both a function of and functional in society, but recognised that without taking such established ideas and applying them to new situations then what had been functional would be dysfunctional and the positive function of society would be seriously challenged. Central to her view of education was positioning, in a wider realm of lived experience and knowledge, accepted ideas, assumptions and practices that could then be open to scrutiny, questioning, development and repositioning in order for them to be appropriate in the context of necessary adaptations to environments impacted by social, political and technological changes. Conceptualisation of issues, in addition to her previously mentioned often acerbic, no nonsense language, was the key to her skill in communication to which the young of her time were highly responsive.

Young People International Labour Organisation Educator Today Social Brain Global Complexity
These keywords were added by machine and not by the authors. This process is experimental and the keywords may be updated as the learning algorithm improves.

…the idea of the future being different from the present is so repugnant to our conventional modes of thought and behaviour that we, most of us, offer a great resistance to acting on it in practice.