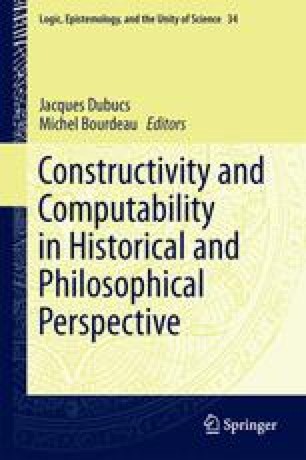 Chapter
Part of the Logic, Epistemology, and the Unity of Science book series (LEUS, volume 34)

The first half of the paper discusses recursive versus constructive functions and, following Heyting, stresses that from a constructive point the former cannot replace the latter. The second half of the paper treats of the Kreisel-Myhill theory CS for Brouwer’s Creating Subject, and its relation to BHK meaning-explanations and Kripke’s Schema. Kripke’s Schema is reformulated as a principle and shown to be classically valid. Assuming existence of a verification-object for this principle, a modification of a proof of conservativeness of Van Dalen’s, is shown to give a relative BHK meaning explanation for the Kreisel-Myhill connective. The result offers an explanation of why Kripke’s Schema can be used as a replacement of the Theory of Creating Subject when formulating Brouwerian counter-examples. It also shows that the Theory of Creating Subject is classically valid.

Recursive Function Recursion Equation Natural Deduction Constructive Function Existential Quantifier
These keywords were added by machine and not by the authors. This process is experimental and the keywords may be updated as the learning algorithm improves.

Dedicated to Dirk van Dalen on the occasion of his 80th birthday.

I was an invited speaker at the Joint Session in Paris and spoke on the notion of function in constructive mathematics. However, problems of health in 2007–2008 unfortunately prevented me from submitting anything to its Proceedings, whence it was a pleasant surprise, as well as a challenging task gladly undertaken, when Michel Bourdeau and Shahid Rahman requested that I write an introductory essay for the Proceedings volume. Accordingly, in these Afterthoughts I return to some of the things I said in my Paris talk in 2006, as well as present later reflections, caused by rethinking some of the issues and rereading many of the original sources. The material on Brouwer’s Creating Subject that is presented here was not part of my Paris lecture. It stems from research carried out during a Visiting Professorship at Lille, February to April 2012, and I am grateful to my host Shahid Rahman and his students for being such a keen audience. The criticism of the Kreisel-Troelstra-Dummett account was first presented in a Lille seminar April 5, 2012, with, appropriately enough, several of the participants of the Paris Joint Session also present, to wit, my Paris hosts Van Atten, Bourdeau, and Fichot.

I am indebted to Yannis Moschovakis for his valuable comments in the Paris discussion, but above all for sharing with me his correspondence with Alonzo Church and granting permission to publish this important document. I am also indebted to Thierry Coquand for discussion of Heyting’s views, as well as for providing me with a copy of the little known paper by Skolem that is referred to in his contribution to the present volume. Andrew Hodges and Tim Krabbé answered questions respectively on Alan Turing and on Langstaff. Michèle Friend gave helpful comments on the first, non-technical part. Furthermore, as always in recent years, I am indebted to Mark van Atten and Per Martin-Löf for stimulating conversations and valuable comments. In particular, Van Atten, by means of incisive questioning, forced me to revise my formulations on Leibniz and calculemus. He, as wel as Zoe McConaughey, helped greatly in producing the final draft of the manuscript. The IHPST, Paris, in the persons of Michel Bourdeau and Jean Fichot, offered generous hospitality on two occasions in May and November 2012.

Correspondence between Yannis Moschovakis and Alonzo Church in 1968.

Professor Moschovakis reviewed four papers on Church’s thesis for the JSL. The papers were ‘Quelques Pseudo-Paradoxes de la “Calculabilité Effective”’ by Jean Porte, ‘An Argument Against the Plausibility of Church’s Thesis’ by Laszlo Kalmár (1959), ‘Rekursivität und Konstruktivität’ by Rózsa Péter and On some recent criticism of Church’s Thesis by Elliott Mendelson (1963).

The review, which is highly relevant review to our topic, was printed in The Journal of Symbolic Logic, Vol. 33:3 (Sep., 1968), pp. 471–472. Many of the topics addressed in Moschovakis’ review and in the ensuing correspondence have been addressed in the main text of my paper, though I deliberately refrain from discussing Kalmár’s non-plausibility argument against Church’s Thesis that is conducted in terms of a purported counter-example. In his brief article Kalmár discusses or makes use of many themes that have been covered, for instance, the use of Kleene’s set K, definition of functions by means of undecided separation of cases, and the nature of assumptions that something is known. He also makes use of an assumption analogous to Kreisel’s reading of CS in terms of the existence of an ‘enumeration’ of demonstrations. A proper treatment of the complex dialectical structure of Kalmár’s reasoning, together with a review of the not inconsiderable discussion that was provoked by his paper, would double the length of the present paper. Accordingly, in order not to try the Editorial patience beyond endurance, it shall be left for another occasion.

I. Holograph letter from Moschovakis to Church, submitting the review of the four papers.

You might be interested in one of the mathematical points that originally caused me some difficulty in writing this up and which I still have not resolved entirely to my satisfaction. Kalmár’s argument appears silly on first reading and may very well be silly through and through. It is rather close, however, to some of the arguments that Brouwer used in his later years concerning the so-called ‘creating agent’. Kripke has extracted from these arguments the following principle, whose formal version is sometimes called Kripke’s Schema:

if P is any proposition, then there exists a (constructive) sequence k 0, k 1, … of integers such that P is true if and only if some k i = 0.

Apparently Brouwer’s motivation is that the sequence k 0, k 1, … can be ‘constructed’ (empirically and not by a mechanical procedure) by the ‘creating agent’ in his effort to find proofs for P; he sets k n = 0 if at time n he has found a proof. This is very close to Kalmár’s argument, except that Kalmár uses classical reasoning to obtain his ‘paradoxical’ conclusion. This is a very big difference, since the entire justification for Kripke’s Schema (to the extent that it can be justified) lies in the inuitionistic interpretation of absurdity: P is absurd if no proof for P can be found (by any creative agent, in all time, presumably). In the end I decided that the explicit use of the classical ideas by Kalmár made his argument sufficiently different so I left the analogies with these ideas of Brouwer out of the review. But it is interesting to note that within the kind of intuitionistic mathematics that accepts Kripke’s Schema, Kalmár’s algorithm is acceptable. (Kripke’s Schema has been used to violate formal versions of Church’s thesis in systems with variables for ‘constructive’ sequences by Myhill and Kreisel, I believe.) I do not know if Kalmár knew of the Brouwer ideas and whether he was influenced.

II. Typed reply by Alonzo Church to the above letter.

This is just to thank you again for your review of Porte, Kalmár, et. al., and to make in partial reply to your letter the following historical remarks.

1. ‘Church’s Thesis’ was originally proposed (Bulletin of the A.M.S. vol. 41(1935), pp. 332–333) in the context of classical mathematics, with no thought of relating it to intuitionism or other form of constructivism, either in the sense of requiring a constructive proof or constructive interpretation of the existence proposition that was in question, or in the sense of using the thesis as a means of characterizing the (or a) notion of constructive proof. Indeed in the historical context of the date it might well be said that the notions of calculability (the adjective ‘effective’ is superfluous) and provability had long existed in a pre-formal way in classical mathematics. But it can at most very doubtfully be said that a notion of constructive provability existed in classical mathematics. Kleene later proposed to use the thesis in order to make a classical study of the notion of intuitionistic proof. This was done without altering the thesis by reconstructing its existential quantifier intuitionistically; and this led to objections from Heyting, who of course held that the existential quantifier must be so reconstructed.

2. Though I have no definite information, I think it unlikely that Kalmár’s argument was suggested or influenced by the ideas of Brouwer to which you refer. This is simply on the ground that Kalmár’s mathematical publications have never shown any great concern with | intuitionism. And certainly his argument in the paper under review, as you report it, is the very antithesis of intuitionism. That is, he assumes in effect that, for every x, either there is a proof of Ax (by some correct means) or there is a proof of the negation of Ax (by some correct means, in each case). And this is a special case of, and clearly kindred in spirit to, Hilbert’s principle of the solvability of every mathematical problem, which Brouwer once so roundly denounced. I am not familiar with the Myhill-Kreisel paper to which you refer, but I suppose that their proof can hardly proceed in a way that parallels Kalmár’s, or at least not unless they take Hilbert’s principle or some special case of it as an axiom.