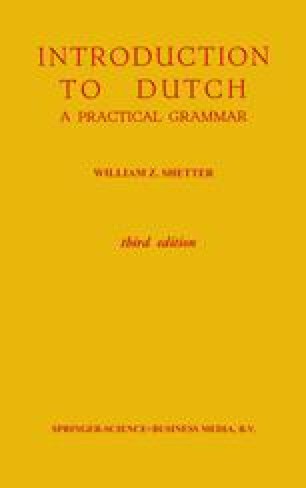 The great variety of spoken sounds of a language can by their very nature not be satisfactorily described on paper; the sounds of a new language being learned must be heard at as early a stage as possible. The following brief summary is therefore intended only as a rough guide to the pronunciation of the principal Dutch sounds. Such a summary of sounds must necessarily be inexact as well: even though many Dutch sounds can best be identified through comparison with corresponding English sounds, we can say that practically no vowel or consonant of Dutch sounds exactly like any vowel or consonant of English. The beginner must beware especially of the misleading cases in which a Dutch letter or combination of letters represent a sound entirely different from the one they represent in English, for example ch, sch, g, r. In Dutch, as in English and all other languages, nearly all sounds vary slightly depending upon the nature of the surrounding sounds, though in most cases the speaker is not aware of this. In our discussion of Dutch sounds only the most important of such variations will be mentioned, for example the divergent pronunciation of certain vowels before r.

Stressed Syllable Rough Guide Vowel Quality Phonetic Transcription Back Vowel
These keywords were added by machine and not by the authors. This process is experimental and the keywords may be updated as the learning algorithm improves.
This is a preview of subscription content, log in to check access.