Studies in the History of the Law of Nations 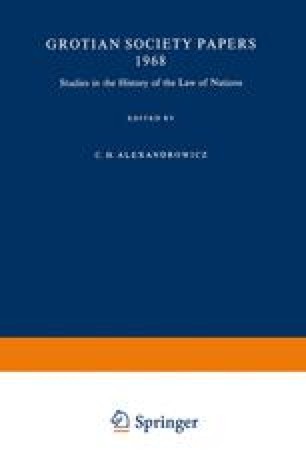 An Essay in the History of the Principle of Self-Determination

The significance of the principle of self-determination has long been undersetimated, or suppressed, in the Anglo-Saxon Countries in spite of the repeated appearance of communities deriving from native political struggle from the American War of Independence until the present day, and the homage paid to the principle in the form of federal constitutions and other structures providing autonomy. The object of this essay is to present, in a provisional way, the main elements in the history of the principle of self-determination, taking the United Nations Conference on International Organisation as a convenient terminal. It is true that it is not easy to give precise definition to the principle of self-determination but it appears to have a core of reasonable certainty. This core consists in the right of a community which has a distinct character to have this character reflected in the institutions of government under which it lives. The concept of distinct character depends on a number of criteria which may appear in combination. Race (or nationality) is one of the more important of the relevant criteria but the concept of race can only be expressed scientifically in terms of more specific features, in which matters of culture, language, religion and group psychology predominate. The physical indicia of race and nationality may evidence the cultural distinctiveness of a group but they certainly do not inevitably condition it. Indeed, if the purely ethnic criteria are applied exclusively many long existing national identities would be negated on academic grounds as, for example, the United States and Canada.

Federal Constitution Century Religious Struggle Peace Settlement United Nations Charter Colonial Empire
These keywords were added by machine and not by the authors. This process is experimental and the keywords may be updated as the learning algorithm improves.
This is a preview of subscription content, log in to check access.