The Management of Public Utilities by Local Authorities II 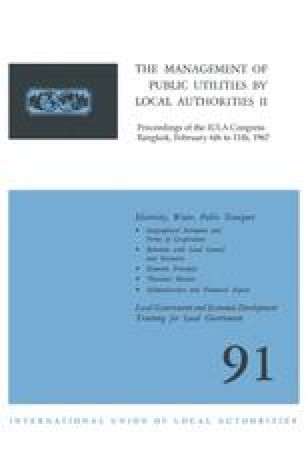 IULA President, Mr. A. Spinoy, Mayor of Mechelin, Belgium, presided over the opening session of the Eighteenth Congress of the International Union of Local Authorities, which took place on February 6, 1967 in Santitham Hall in Bangkok, Thailand. Mr. Spinoy first welcomed the participants, officials of the Government of Thailand and of the City of Bangkok, the Ministers of Local Government of Iran, Korea, Saudi Arabia and the Canadian Province of Quebec, as well as diplomatic representatives of many nations. He also extended greetings to the delegates of national governments participating in the congress as well as representatives of international governmental and non-governmental organizations with which IULA has close relationships.

Local Government Local Authority Prime Minister Public Utility Local Government Official
These keywords were added by machine and not by the authors. This process is experimental and the keywords may be updated as the learning algorithm improves.
This is a preview of subscription content, log in to check access.