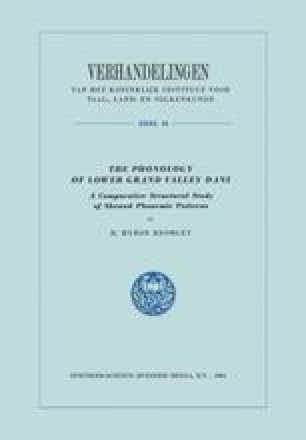 Conclusion: Toward a Comparative Structural Approach to Linguistic and Cultural Data

The dialect of the lower Grand Valley of the Ballem exhibits what is for Dani a unique consonant pattern, with only one set of stops and two voiceless continuants as major correspondences of three sets of stops in proto-Dani and some other extant dialects, and two sets of stops in all other studied dialects. Loss of contrast in some cases, development of contrast in others and a general reshuffling of allophones have produced this marked skewness or non-congruence of phonemic pattern, to facilitate cross-dialect comparison by outside investigators and cross-dialect reading of the local speakers, an orthography based on comparative and diachronic data as well as synchronic descriptive data has been proposed. This symbolizes all phonemic contrasts in the skewed dialect and also selects for separate symbolization some allophones which are in contrast in other dialects, in the local orthography for one dialect only those allophones are separately written which can still be recognized on phonetic and phonemic criteria by the person familiar with only that dialect. Future study of mutual intelligibility of dialects and indications of high reader motivation may warrant extension of this principle by the use of a cross-dialect orthography which would symbolize all the major contrasts in any of the types of extant dialects. Both for description and for graphic representation, comparative and diachronic data have proved relevant to the study of a phonemic system which is askew with the systems of related dialects.

Structural Approach Marked Skewness Austronesian Language Local Speaker Human Flesh
These keywords were added by machine and not by the authors. This process is experimental and the keywords may be updated as the learning algorithm improves.
This is a preview of subscription content, log in to check access.