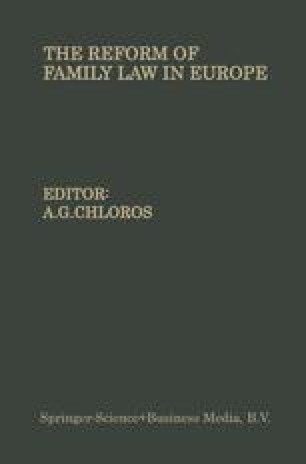 The Reform of Family Law in Luxembourg

Until recently the Grand Duchy of Luxembourg recognised the regime of the incapacity of the married woman just as it had been conceived and worked out by the authors of the French Civil Code. Legislation took a very long time to move from this position so that the Grand Duchy was one of the last countries in Europe to have one half of its adult population with legal capacity and one half without it. Article 212 of the Code, governing the respective rights and duties of the spouses, remained without any modification for more than a century and a half, being Napoleonic both in the letter and in the spirit. Advocates were still confronted in 1972 with such out of date ideas as that the husband must protect his wife and that the wife must obey her husband. The practitioner had the unenviable task of explaining to the ladies that they continued to rank with spendthrifts, the feeble-minded and minors in the privileged capacity of those without legal capacity, that they ought on this account to provide themselves with all kinds of authorisations by the husband, and could not become party to any valid document associated with civil life, that they must cohabit with their husband and follow him wherever he happened to decide to live, and in other absurdities of this kind. “All results of this same happy thought that the spouses, united in a life of procreation are one, in the image of the union of the Church with its founder. It is to this image, in fact, that the attitude of the wife must be linked, in submission to her husband.”1 The same principles of inequality were found in those provisions of the Code which were enshrined in the marriage contract and in the economic powers of the spouses. The basis of the Napoleonic wisdom in this area is found in Article 1421 of the Code which stated that the husband alone administers the community assets. He can sell them, alienate them and mortgage them without the agreement of his wife. Today that would be overstating the position. The Luxembourg legislator has at last turned to different concepts just as neighbouring countries have done. The Civil Code inflicted a double incapacity upon the married woman in contrast to the single woman, the widow or the divorced woman. She was placed entirely under the control of her husband and, regarding the exercise of her civil rights, she was prohibited from carrying out a legal act of any sort without the authorisation of her husband. The two guiding principles of the Code concerning the relationship of the spouses were authoritarianism and paternalism. The incapacity of the married woman under the common law was a general incapacity, with the exception of the special provisions for the wife carrying on a profession and for the wife with separate assets. Incapacity was the rule, capacity the exception. The legal equality of the spouses resulted from a reform which was realised by stages. The government took an interest in the problem for the first time in 1963.

Married Woman Civil Code Parental Authority Civil Procedure Provisional Measure
These keywords were added by machine and not by the authors. This process is experimental and the keywords may be updated as the learning algorithm improves.
This is a preview of subscription content, log in to check access.