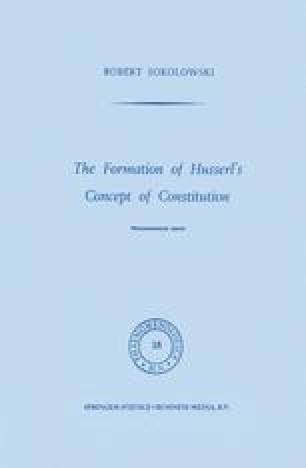 The concept of constitution is one of the key concepts which Husserl employs as a means of philosophical clarification. Through the use he makes of it, something which has been obscure is elucidated, something which was problematic becomes philosophically understandable. If philosophy has been conceived as scientia certa per causas ultimas, the “First Philosophy” which Husserl proposes could be called scientia certa per constitutionem; it is an apodictic, rigorous science that is supposed to clarify reality, and subjectivity as well, through constitution. But what is the nature of such clarification? What is the obscurity that is dissipated by arrival of the word “constitution,” and what does this word do to reality and consciousness to make a phenomenologist feel satisfied that he understands? Is there any obscurity that still remains even after successful application of what Husserl calls constitutional analysis?

Logical Investigation Genetic Constitution Rigorous Science Philosophical Explanation Constitutional Analysis
These keywords were added by machine and not by the authors. This process is experimental and the keywords may be updated as the learning algorithm improves.
This is a preview of subscription content, log in to check access.