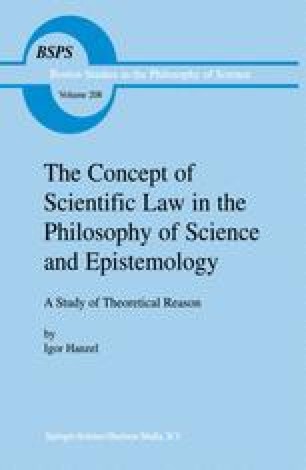 Chapter
Part of the Boston Studies in the Philosophy of Science book series (BSPS, volume 208)

The aim of this chapter is to reconstruct certain aspects of the categorial framework of Marx’s second volume of Capital. The reconstruction of the inherent types of a scientific law in chapter five showed that the essential conditions have the character of the cause, and the essence-producing process is their effect, while in the process of reproduction they continually exchange these functions mutually. So in the inherent organic and in the developmental type of a scientific law, the causal characteristics of the object under scrutiny are understood as having the character of causal loops, i.e. understood in a non-linear manner. Given this proposition, the reconstruction of the categorial framework of the second volume of Capital can have certain implications for the philosophical analysis of those theories in contemporary physics, physical chemistry, and biology which grasp their objects in a non-linear manner. As an attempt at this we apply the results of the analysis of second volume of Capital for the reconstruction of the foundations of non-equilibrium non-linear thermodynamics as given in the works of Ilya Prigogine. In chapter nine I will also subject to analysis from this point of view Manfred Eigen’s concept of the hypercycle.

Social Capital Developmental Type Local Process Global Process Dissipative Structure
These keywords were added by machine and not by the authors. This process is experimental and the keywords may be updated as the learning algorithm improves.
This is a preview of subscription content, log in to check access.