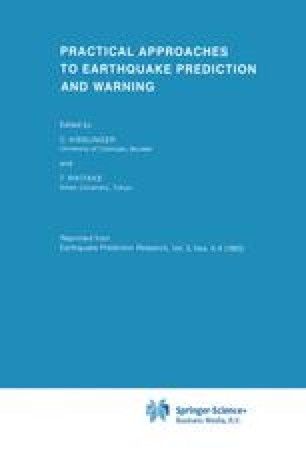 The 1983 Akita-Oki Earthquake (MW = 7.8) and Its Implications for Systematics of Subduction Earthquakes

The source parameters of the May 26, 1983, earthquake off the coast of Akita prefecture (02h59m59.6sUT, 40.462°N, 139.102°E, 24 km, m b = 6.8, M S = 7.7) determined from long-period surface waves are: This mechanism is consistent with a plate model, recently suggested by several investigators, that places the boundary between the Eurasian and North American plates along the Japan Sea Coast of Honshu Island, Japan. Within the framework of this model, Honshu, Hokkaido and Sakhalin reside on the North American plate, and the Akita-Oki event represents subduction of the Eurasian plate beneath the North American Plate. The convergence rate V between the North American and Eurasia plates is 1.1 cm/year along the Japan Sea Coast of Honshu and the age T of the plate being subducted is estimated to be about 20 M years. For these values of V and T, a previously determined empirical relation between earthquake magnitude, convergence rate and plate age for large earthquakes at subduction zones predicts a magnitude (M W) of 8.0 which agrees very well with that of the Akita-Oki earthquake. This good agreement between the observed and predicted values of M W suggests that the empirical relation is valid for subduction zones with very small T and V such as the Juan de Fuca subduction zone, Pacific Northwest, for which V = 3 to 4 cm/year, T = 10 to 15 M years and M W = 8.4 has been estimated.

There is some indication that interplate slip at subduction zones with a very young (T < 20 M years) subducting plate has a significant amount of aseismic component, which increases the repeat time.

Subduction Zone Large Earthquake Rayleigh Wave Seismic Moment Empirical Relation
These keywords were added by machine and not by the authors. This process is experimental and the keywords may be updated as the learning algorithm improves.
This is a preview of subscription content, log in to check access.