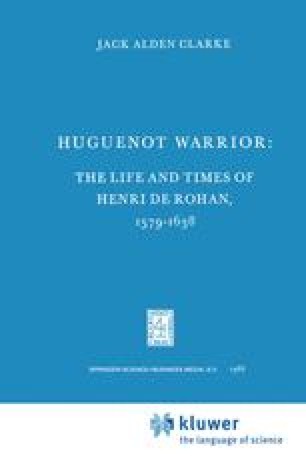 The Party Seeks a Leader

As a royal favorite the Duke of Rohan was bound by court etiquette to a monotonous attendance on the sovereign. Henry IV kept his young cousin constantly near him and required his presence at receptions and councils of state. “The Court passed the winter after their wonted manner,” the Chronicler Francois de Mezeray recorded disapprovingly. “Dancing, gaming, feasts, balls, and comedies, especially those of the Italians, were their daily diversions.” 1 In such an atmosphere Rohan could not possibly be happy. Young, active, and thirsting for glory, he felt that he should be learning his profession in order to qualify for the military rank to which his birth entitled him.

Provincial Council Lieutenant Governor Royal Authority Reform Party Young Cousin
These keywords were added by machine and not by the authors. This process is experimental and the keywords may be updated as the learning algorithm improves.
This is a preview of subscription content, log in to check access.