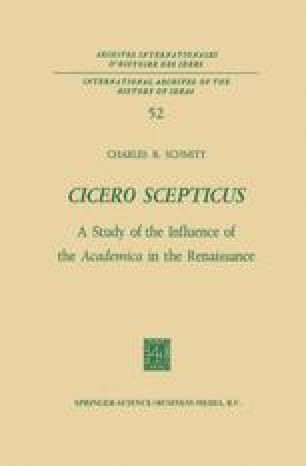 The Academica at Paris in the Middle of the Sixteenth Century: Talon, Galland and Others

It was at Paris in the middle years of the sixteenth century that some of the more interesting ideas of the Academica came to be discussed seriously again. Perhaps for the first time since Antiquity there was an attempt to understand Cicero’s work and to come to grips with some of the key philosophical concepts contained therein. There even emerged a group of thinkers — though not perhaps as precisely identifiable as some interpreters would lead us to believe — who advocated the revival of some of the teachings of the ancient New Academy. Many aspects of these events remain obscure and a fuller understanding of them must wait until the philosophical life at Paris during the sixteenth century has been studied in greater detail and with a more thorough exploitation of the extant sources. What seems evident, however, is that the new interest in the Academica was centered on Petrus Ramus and his group of reformers at the Collège Royal. Although not the only intellectual development at Paris during the period, it is interesting to note this rise of scepticism, which predates the interests of Montaigne, Charron, Gassendi, and others by several decades. It was undoubtedly connected to some extent with the religious controversies of the time, but perhaps the religious aspect has been somewhat overemphasized by several recent interpreters.

Sixteenth Century Classical Tradition Academic Position Academic School Philosophical School
These keywords were added by machine and not by the authors. This process is experimental and the keywords may be updated as the learning algorithm improves.
This is a preview of subscription content, log in to check access.

Cite this chapter as:
Schmitt C.B. (1972) The Academica at Paris in the Middle of the Sixteenth Century: Talon, Galland and Others. In: Cicero Scepticus. International Archives of the History of Ideas / Archives Internationales d’Histoire des Idees, vol 52. Springer, Dordrecht. https://doi.org/10.1007/978-94-017-1037-4_4